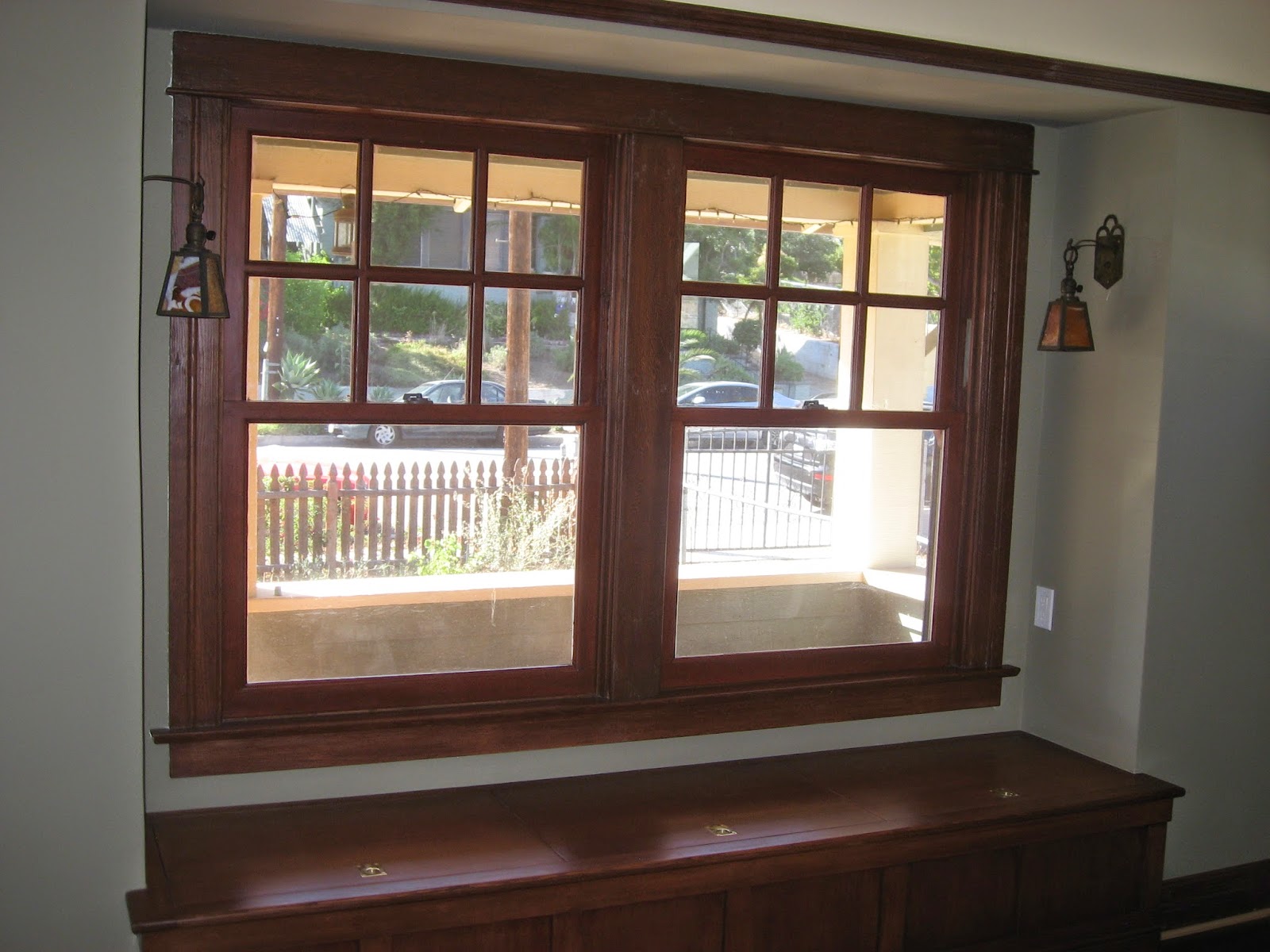 We finally got the wall sconces installed abover the window seat.

We originally bought these to use outside on the back of the house, but it turned out they were really indoor lights.  I think they've been repurposed perfectly! 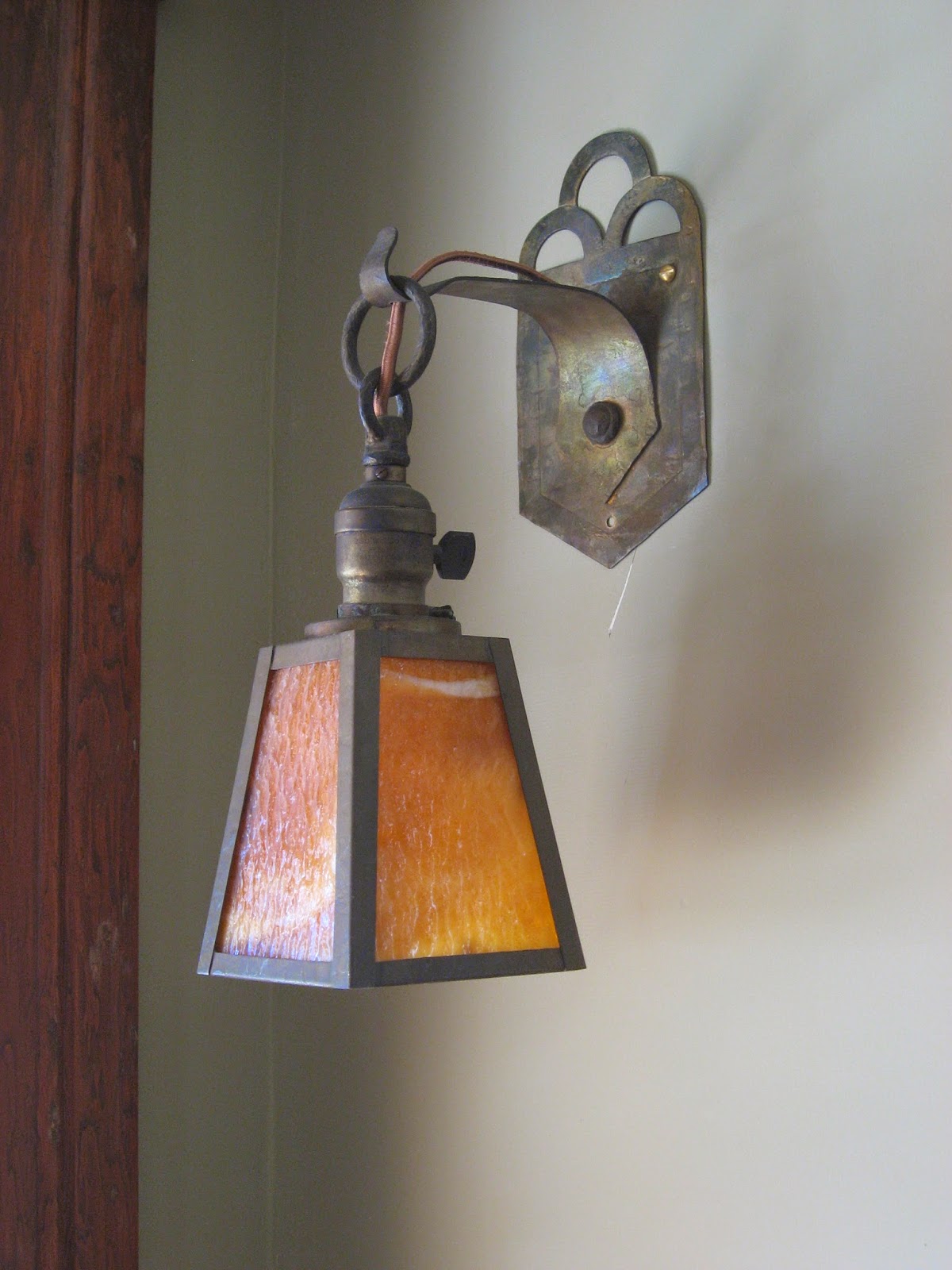 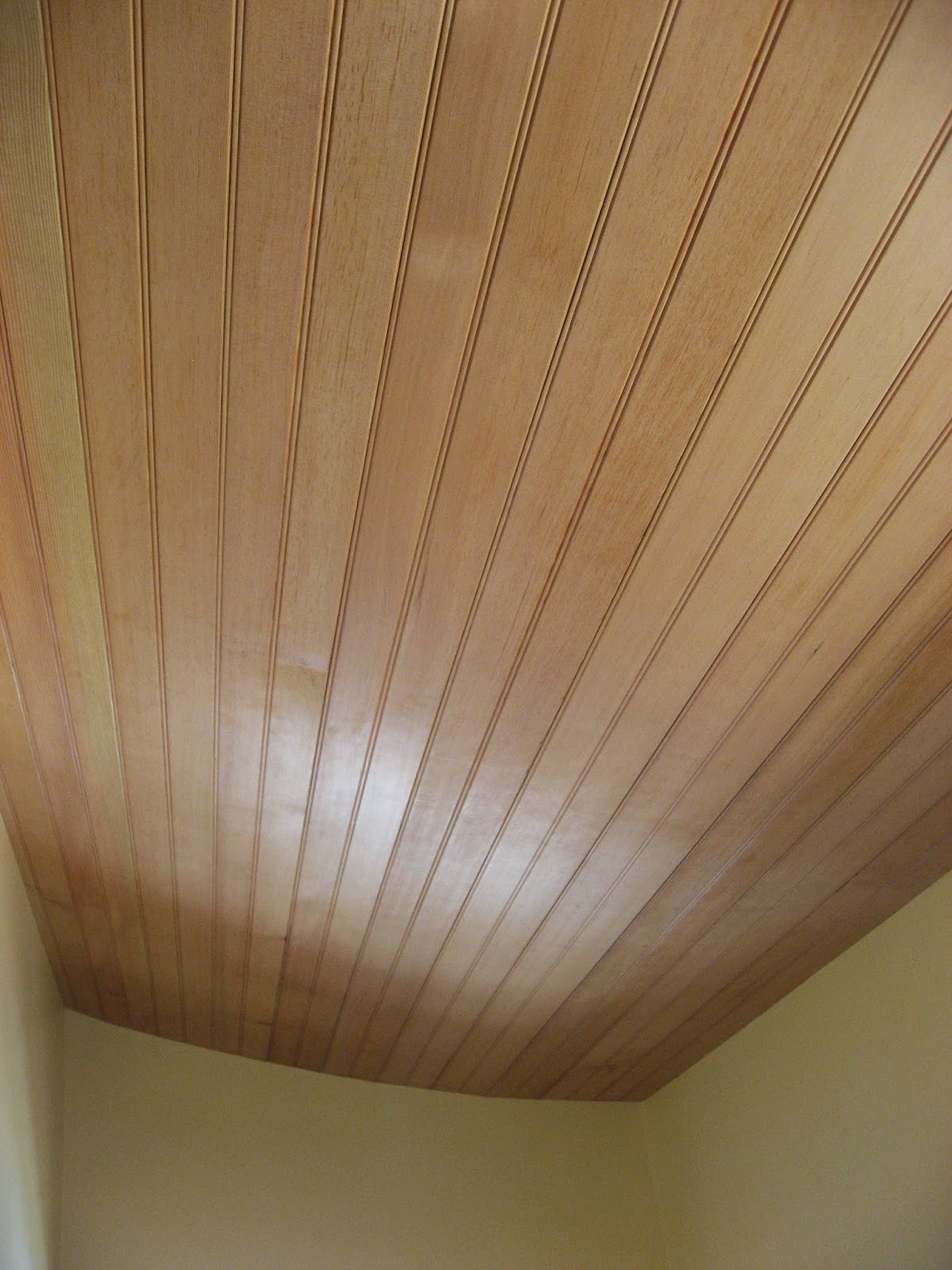 Keeping with our tradition of putting wood ceilings in porches, we put a beadboard ceiling into the old porch we converted into a breakfast nook.
Posted by Ms. Nidoog at 6:01 PM No comments:

Top of the Morning to Ya 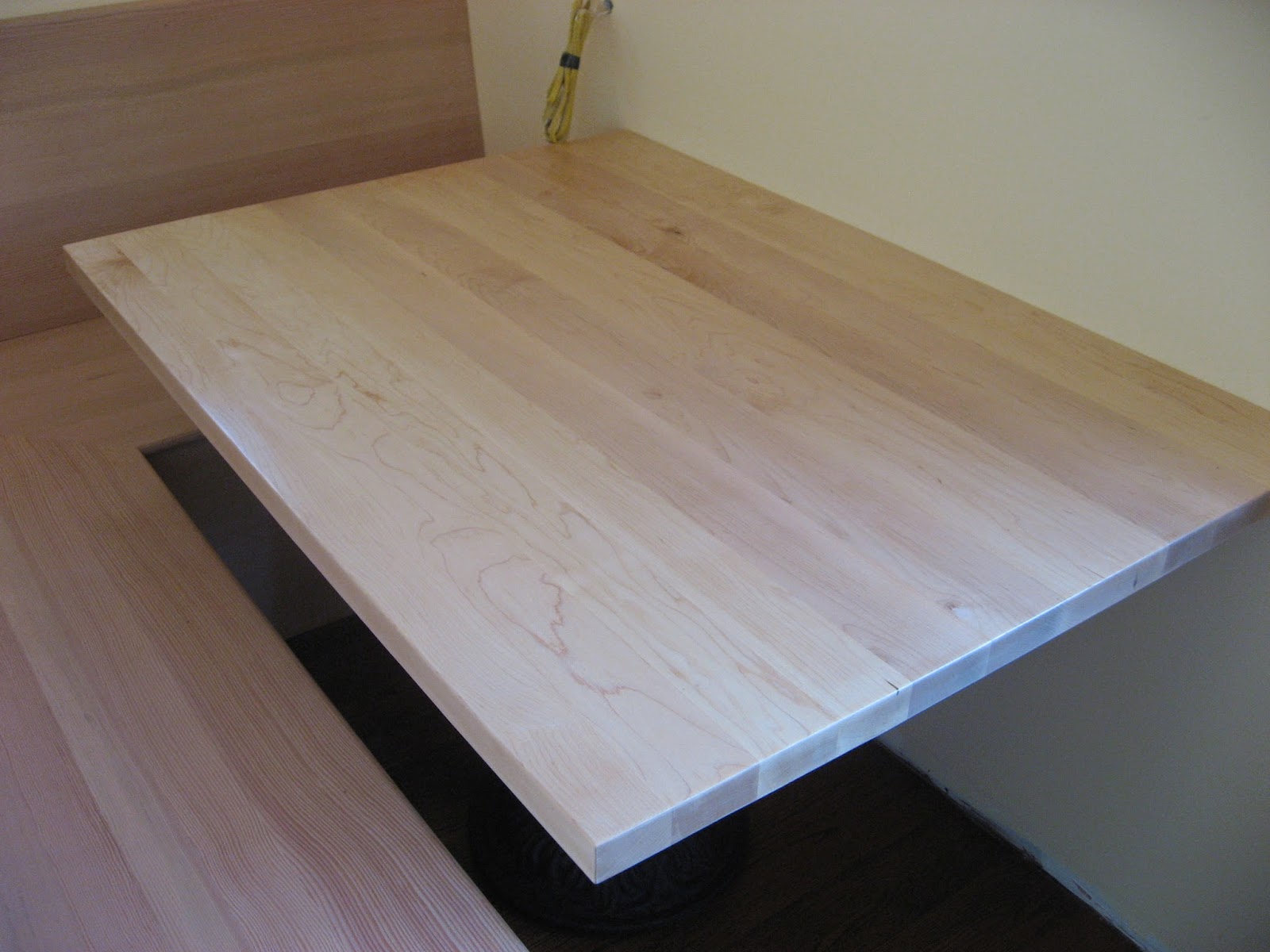 The tabletop has been installed in the breakfast nook.  It's made out of maple, the only thing in the kitchen that is.  I'm not entirely sure if I love the blonde wood against the yellow walls, but we'll see how I feel once we get the benches stained.

The leg is cast iron and reminds me of the cafe table legs in France.  We are definitely mixing in different styles and periods in this part of the kitchen, but no need to make the house an Arts and Crafts museum! 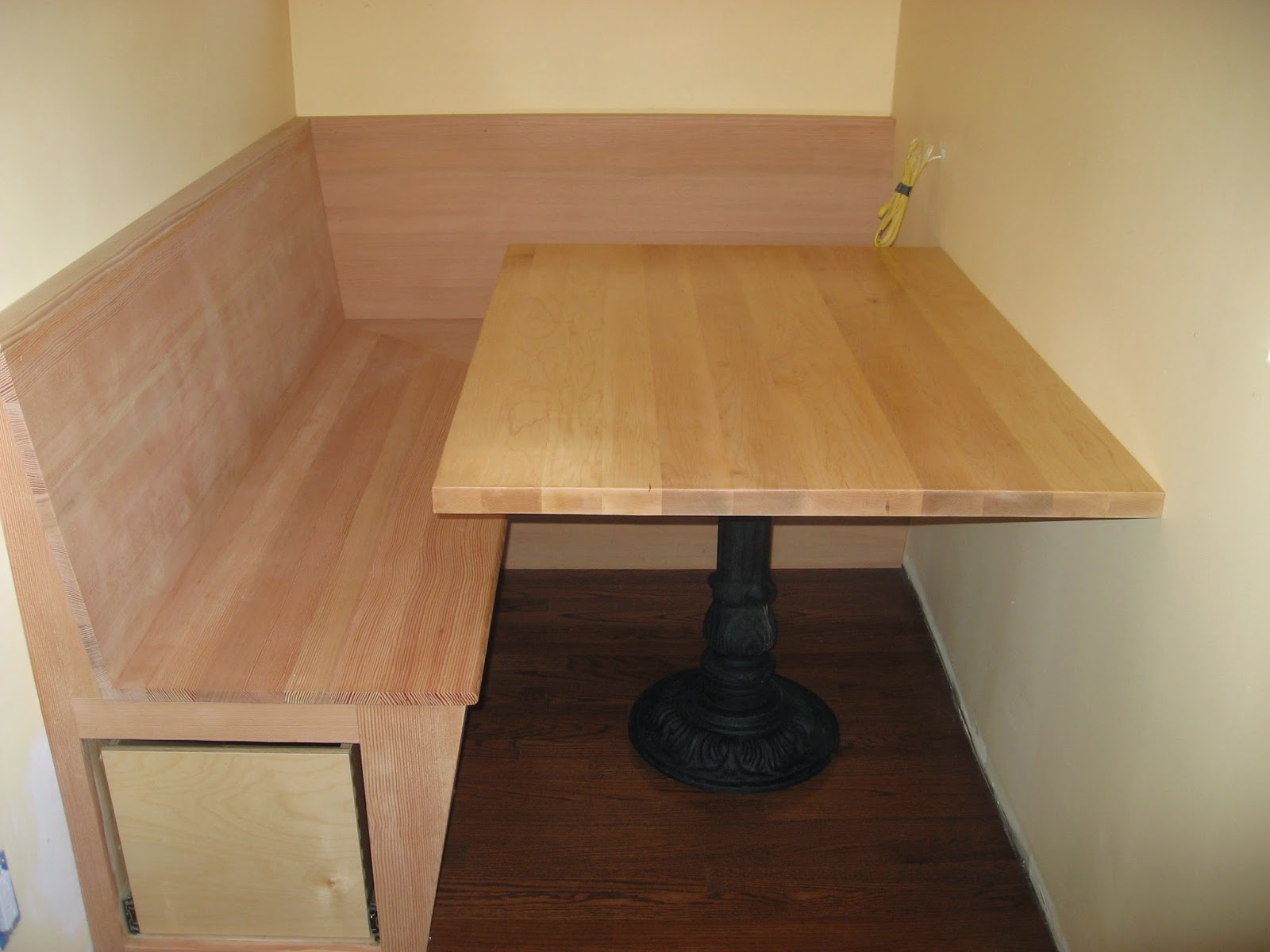 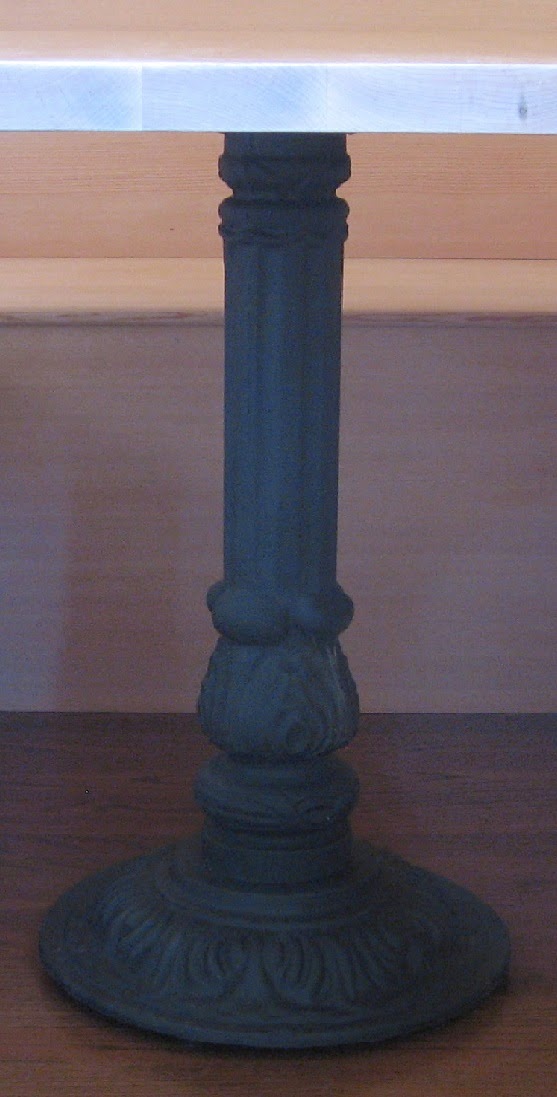 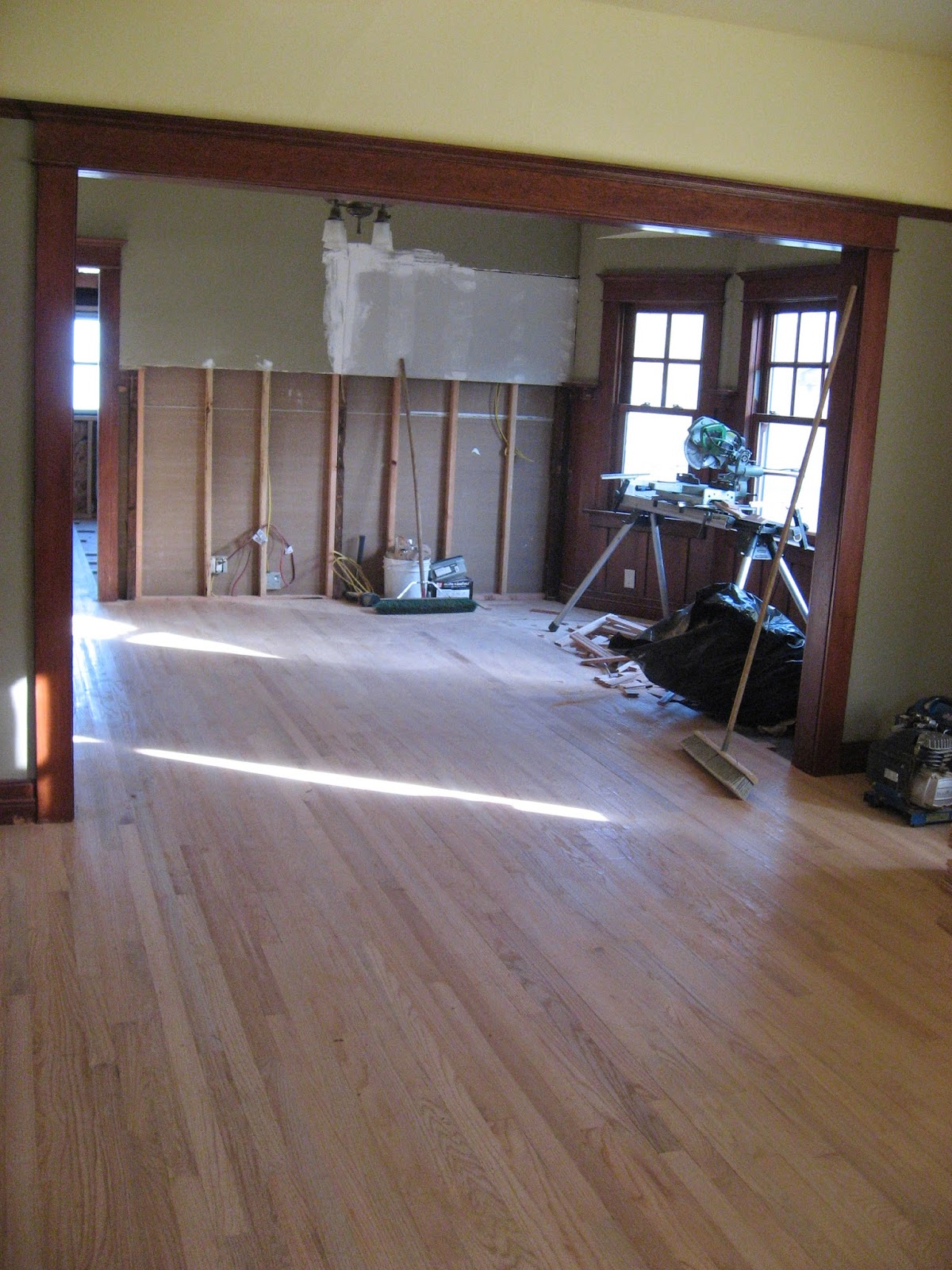 Here you can see the new hardwood floors before they were stained.

In the back, you can also see where the dining room is being prepped to install wainscoting on the one wall that didn't have it.
Posted by Ms. Nidoog at 3:56 PM No comments:

Getting in on the Ground Floor 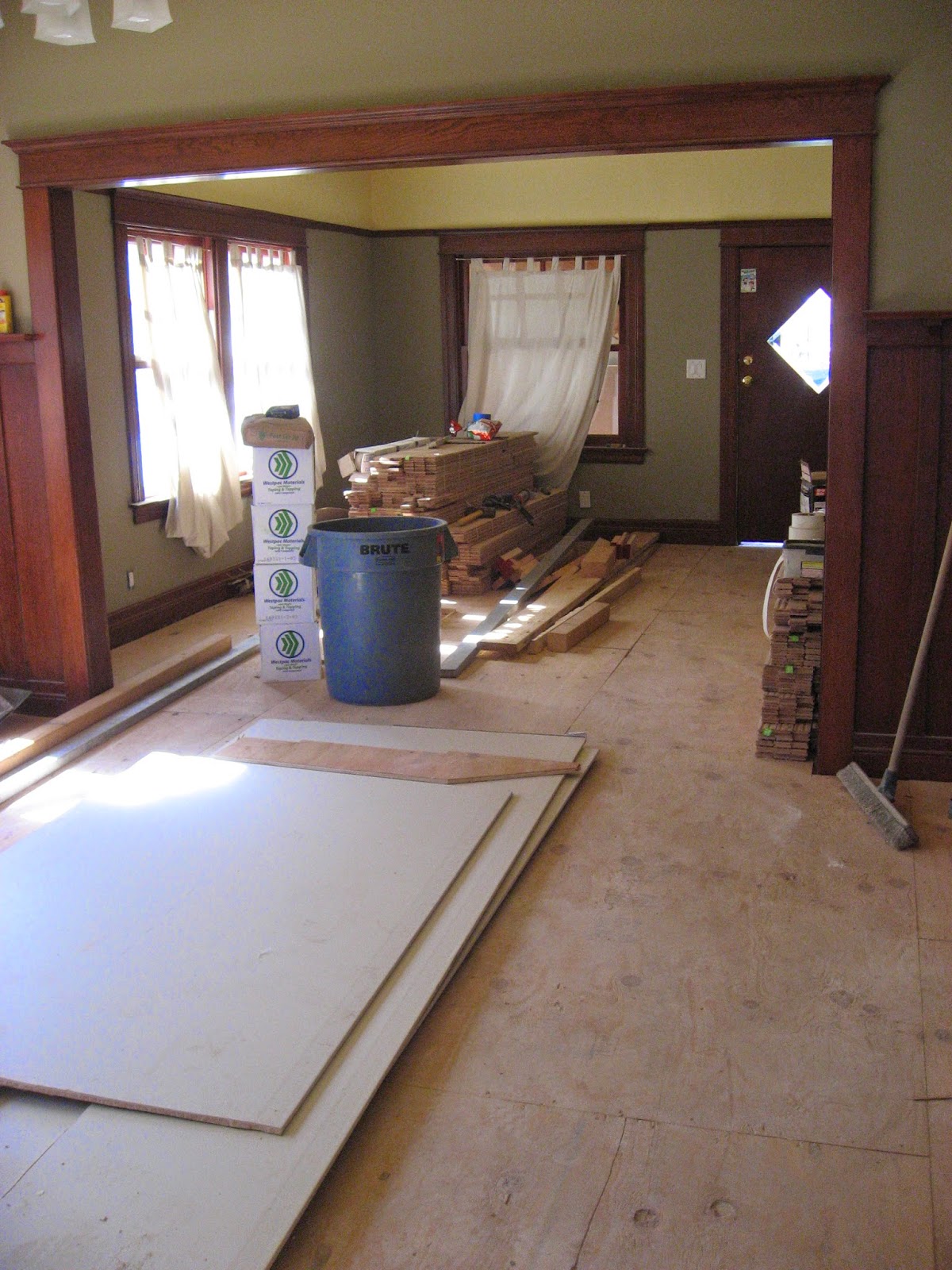 After removing the old floor, the next step was laying down plywood over the existing sub floor.

The existing sub floor was very thin, and ran on a diagonal.  Because we plan to eventually put room in the attic, we really needed this new sub floor to give the house diaphragm strength.

The existing sub floor was wavy and laying the plywood took longer than expected.  It reminded me when we did the shear walls.

I really never expected to have this much plywood in my house.
Posted by Ms. Nidoog at 7:47 AM No comments: 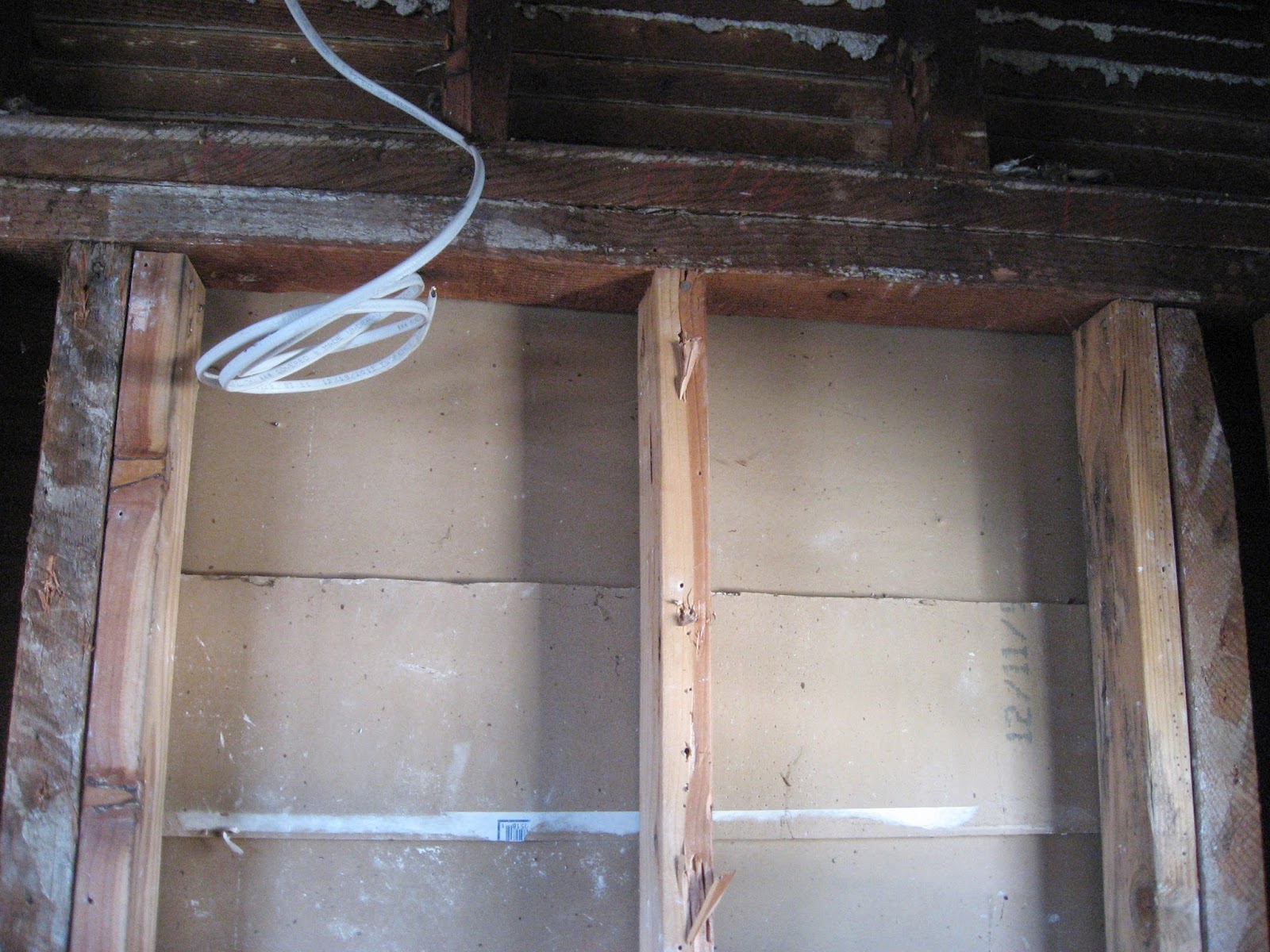 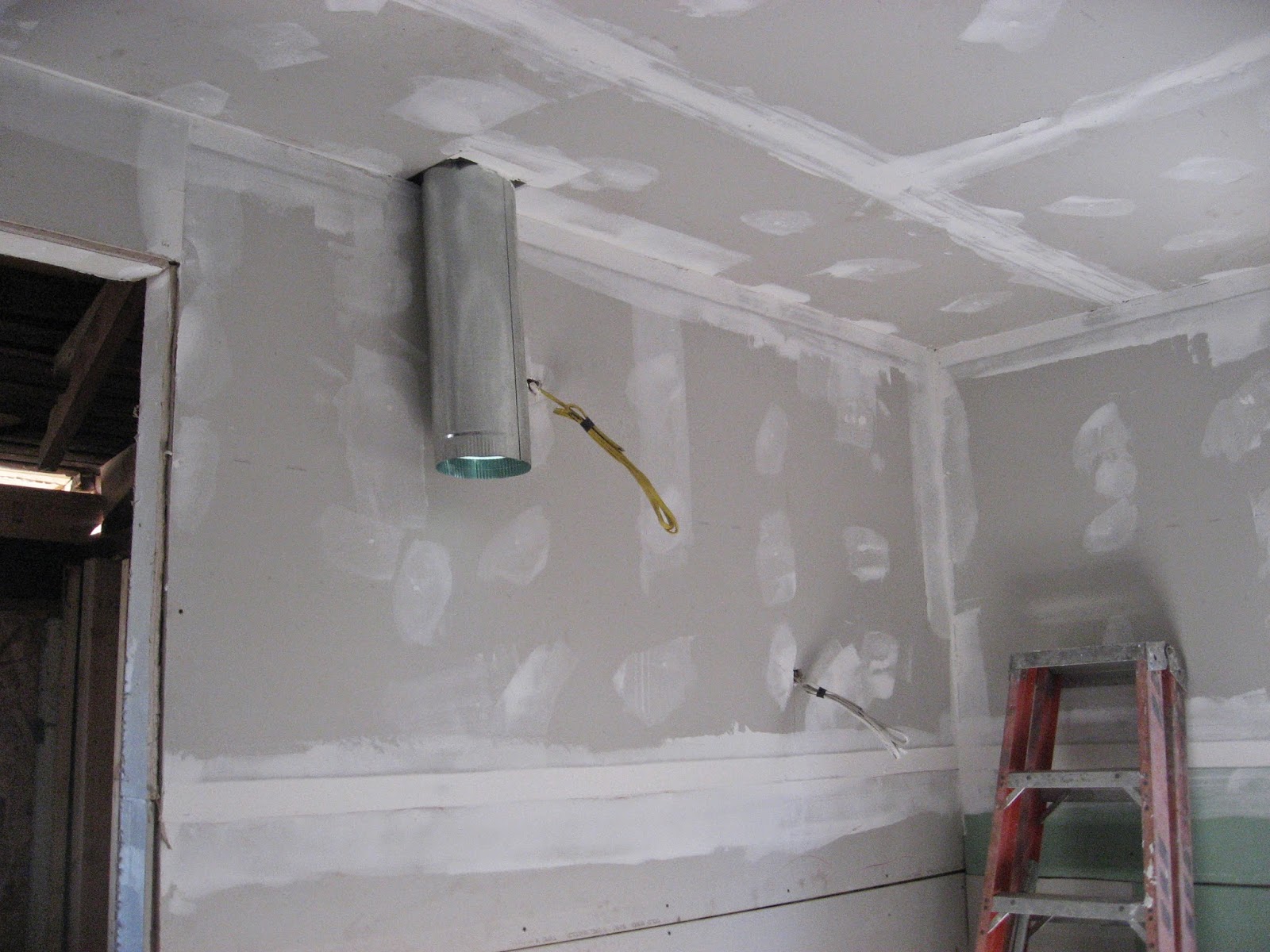 The walls in the kitchen had to be taken down to the studs.

Here you can see some of the original lathe.  Rob wanted to plaster the kitchen, like we did with the walls in the basement, but the contractor convinced him we would be getter off going with drywall.

The metal tube you are looking at is the temp placement for the exhaust fan. We haven't had one the whole time we've lived here, so I'm hoping this well keep me from setting off the smoke detectors. 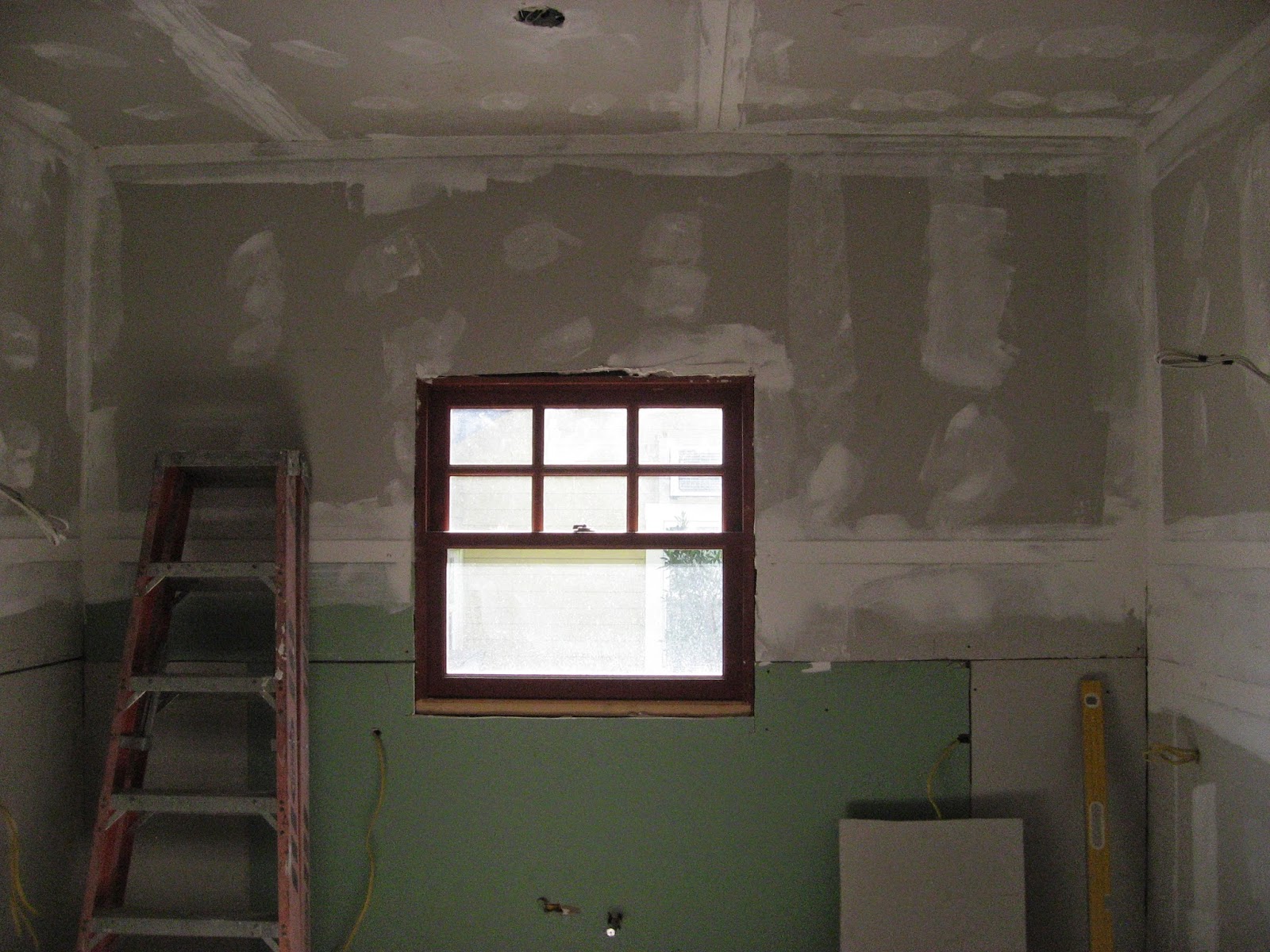 Every Nook and Cranny 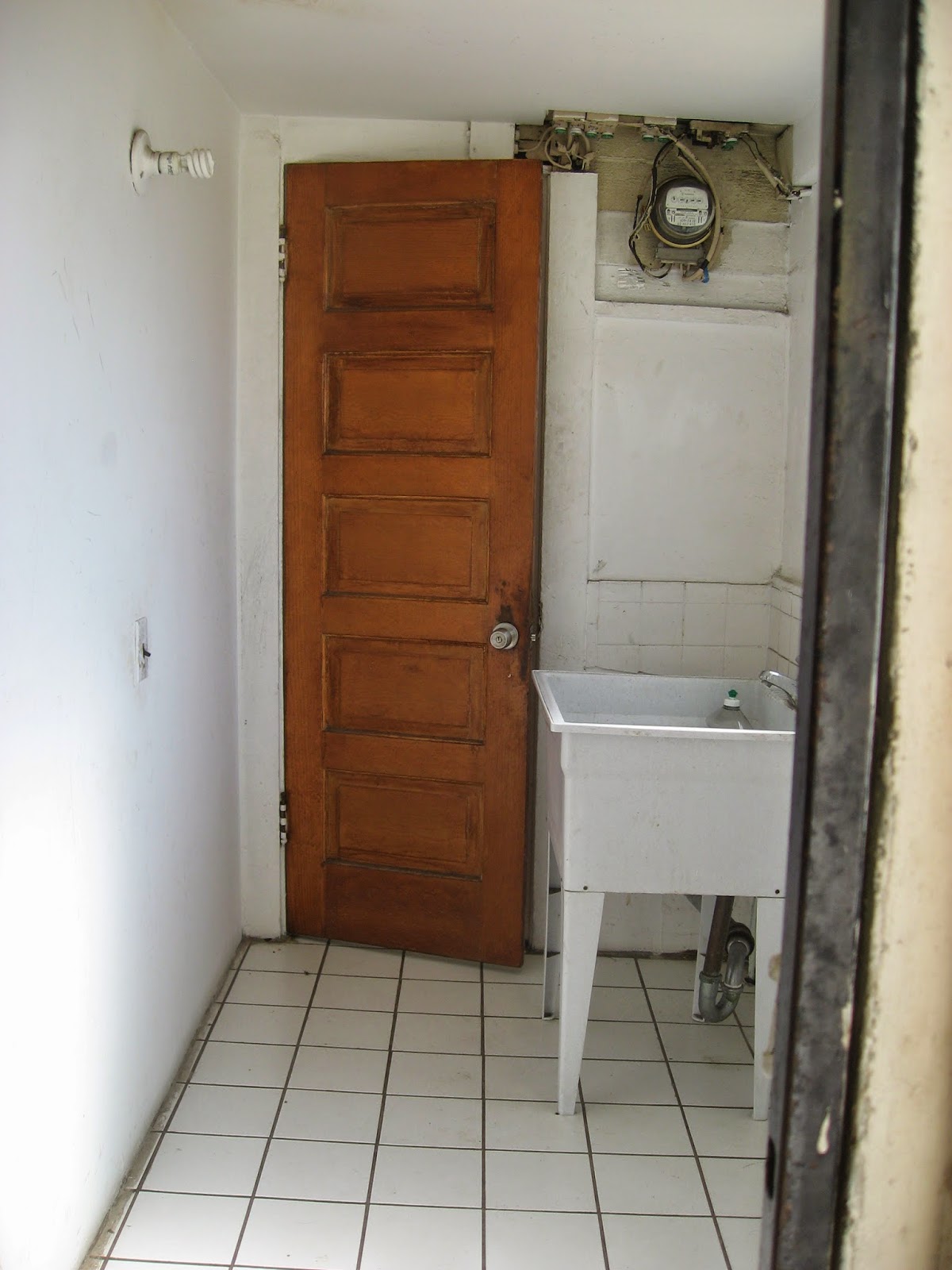 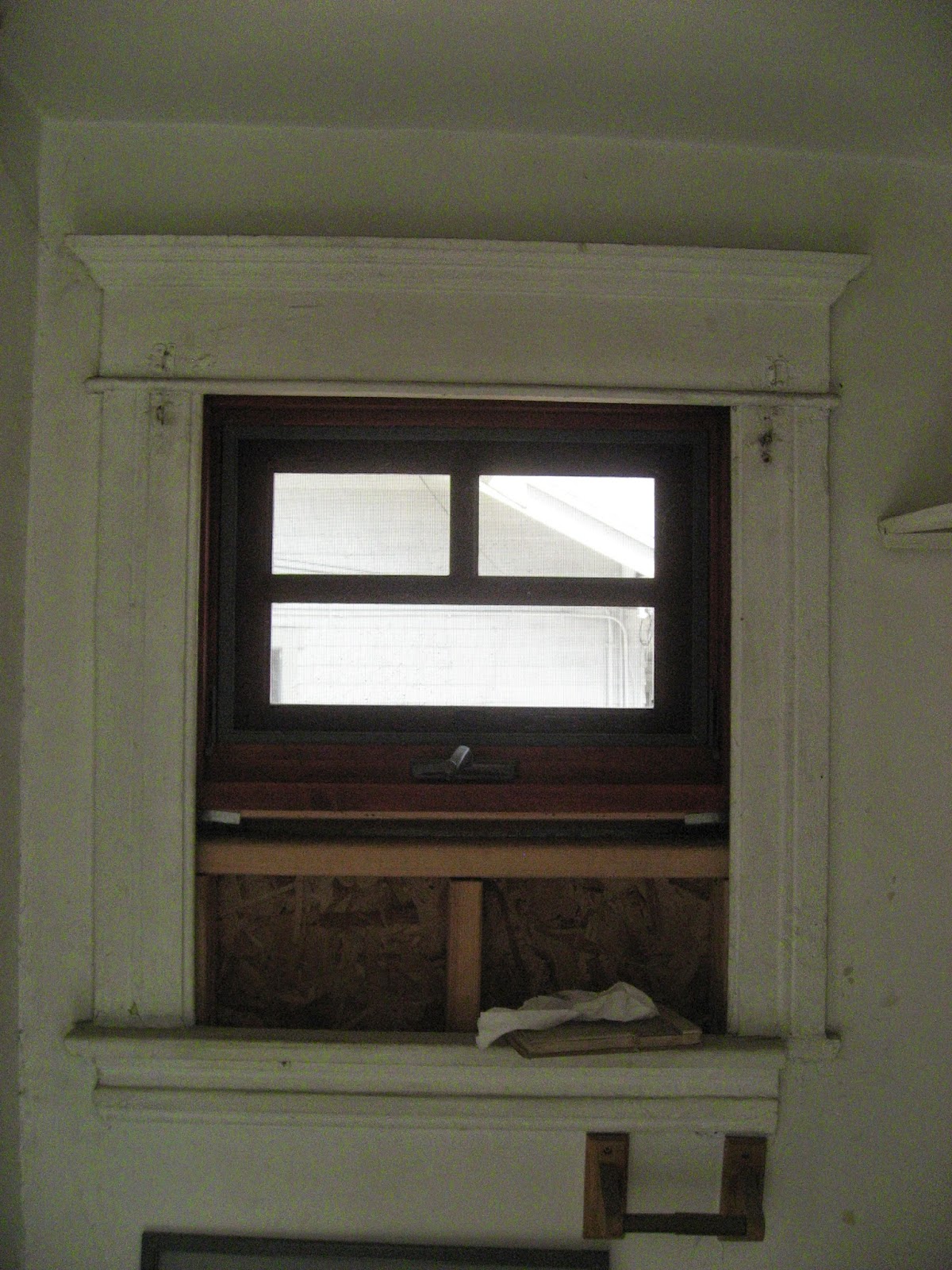 This picture was taken before we started doing any work on the house. It's in the part of the kitchen that used to be a porch, but was closed in by a previous owner.  If you look closely by the electric meter (yes, the electric meter was INSIDE when we first moved in), you can see some of the original siding.

To the left of where I am standing to take this photo is the main part of the kitchen.  The door you are looking at leads to the world's tiniest bathroom -- just big enough for a toilet.

And that is one of the greatest mysteries of our house.  As you can see in this picture I took while we were replacing the windows a few years ago, the window casings in that bathroom match the original casings elsewhere.  So back in the day, did the inhabitants have to access this toilet from outside?!?!? 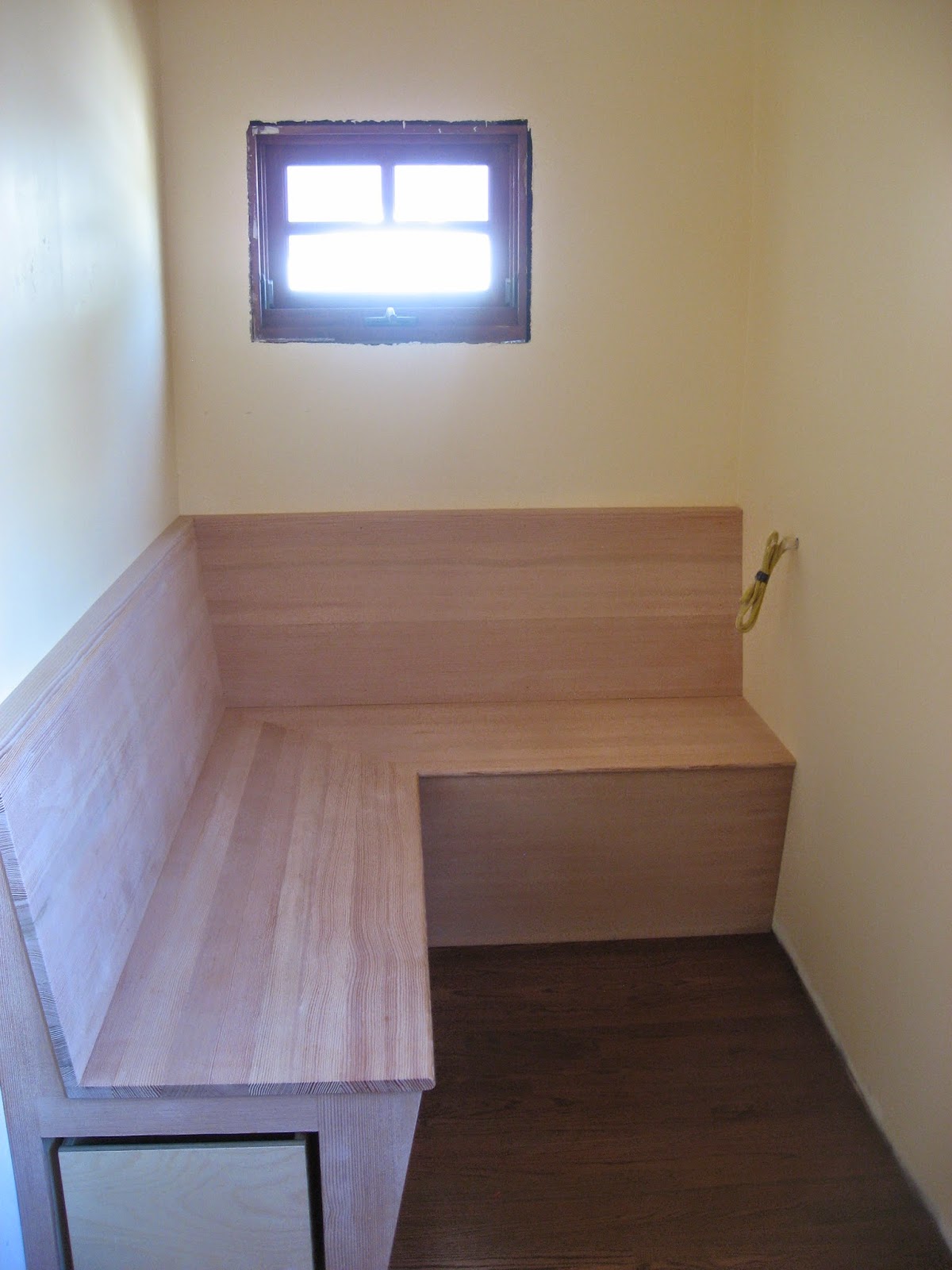 As part of the kitchen remodel, we ripped out the wall to the bathroom and built a breakfast nook.  Here it is in process.  The square in the bench is actually a drawer the runs length of the bench, but the front panel hasn't been put on it yet.  Since the original house was built without closets, I am determined to add as much storage as humanly possible. 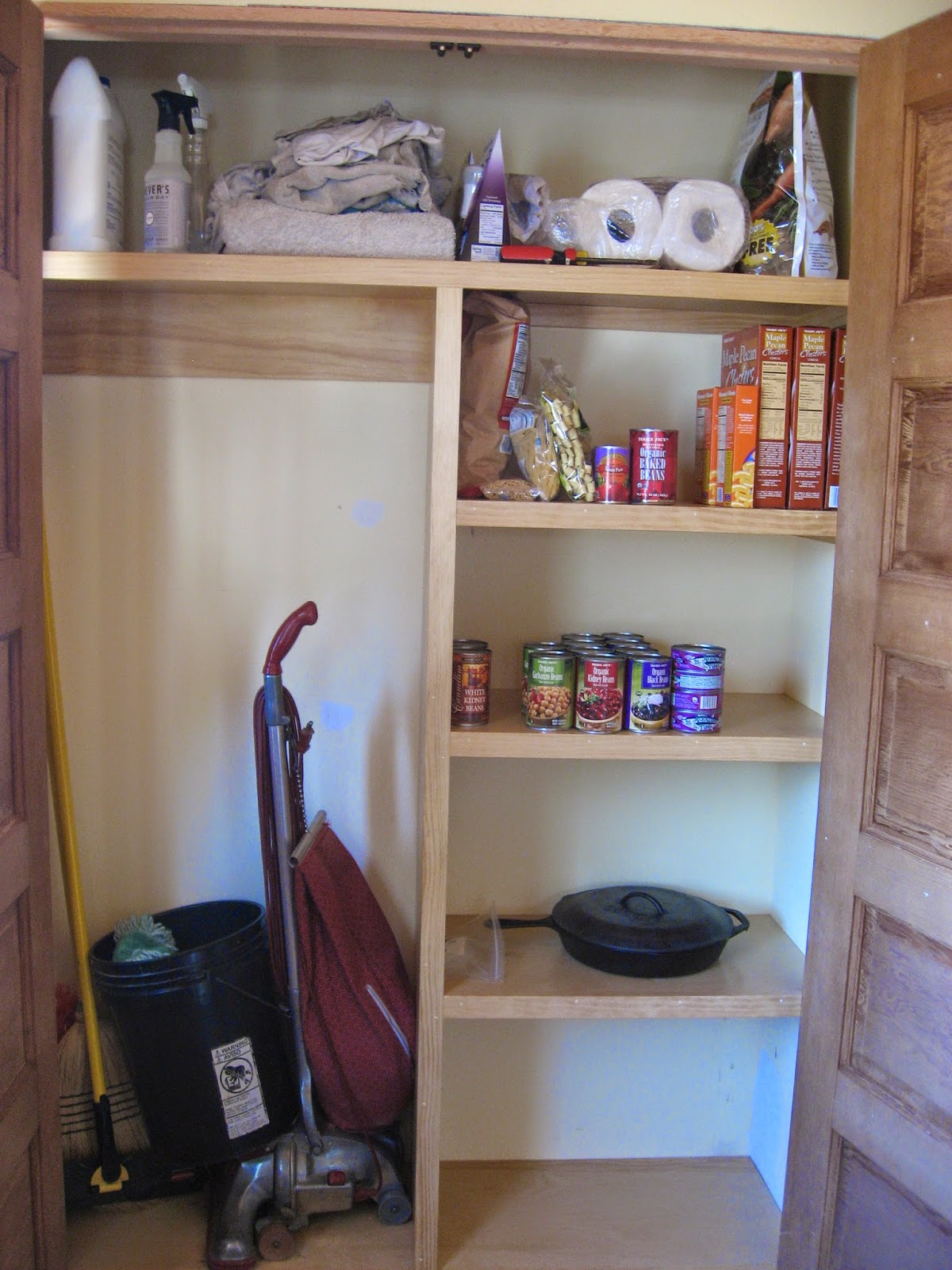 I bought an entire cart of groceries at Trader Joe's and didn't even come close to filling the pantry.  Normally I only bring home the stuff that can fit in the little basket you carry around by hand because that was all I had room for on the gorilla shelves.

Not sure what I will do with all this space!
Posted by Ms. Nidoog at 8:47 AM No comments:

Email ThisBlogThis!Share to TwitterShare to FacebookShare to Pinterest
Labels: pantry, progress, this makes me happy

Trading One for Two 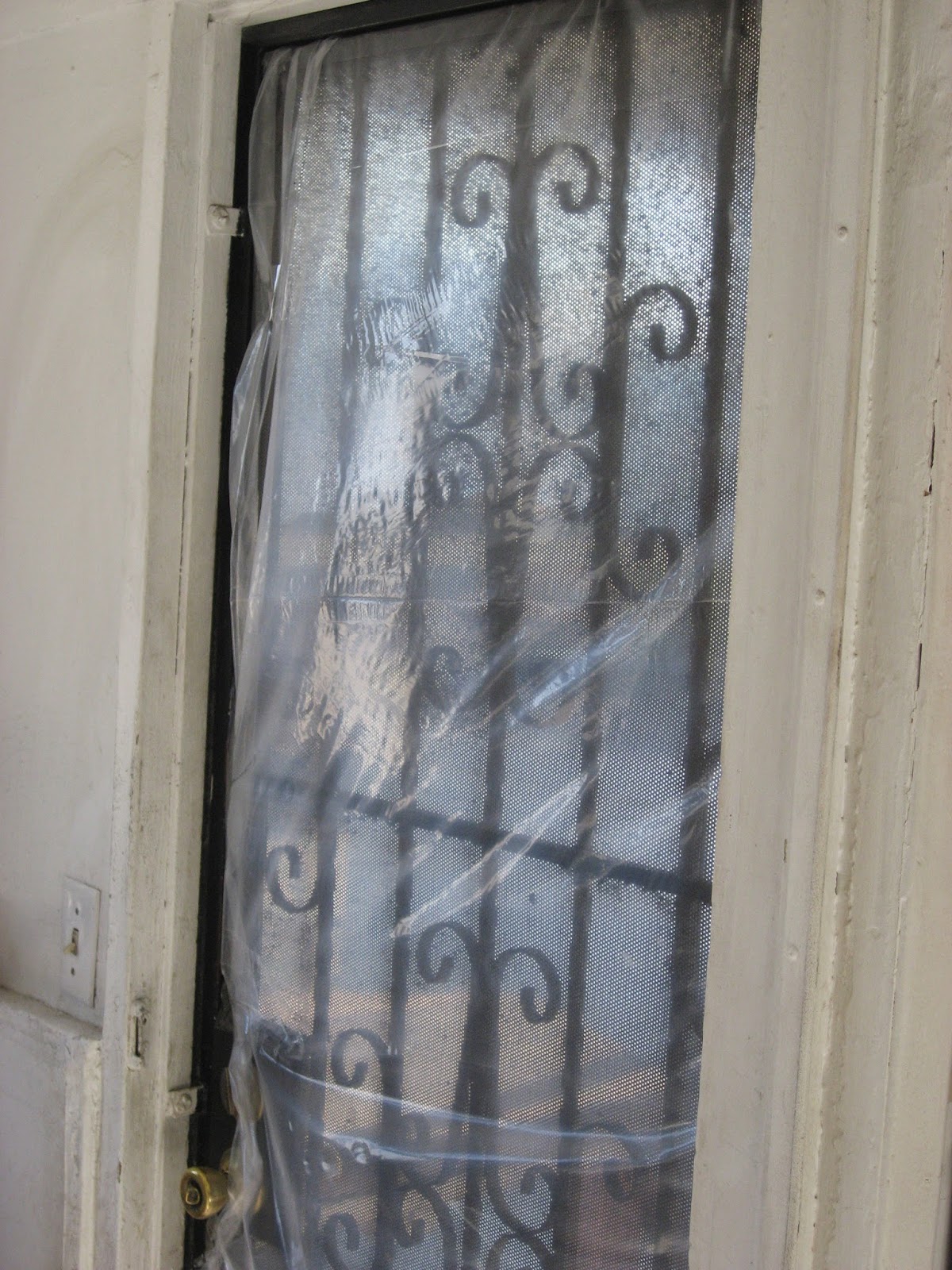 There used to be a ghetto door to the world's most rickety staircase in the back portion of the kitchen.

We took that out almost as soon as we moved in and now we have finally made use of the space.

The wall has been built out to make a pantry and we used two of the doors Rob salvaged on it.  The pantry is about 12 inches deep, which was how long we needed to extend the wall on the east side of the kitchen so that we could put the stove on an outside wall and make it easier to vent the exhaust fan. 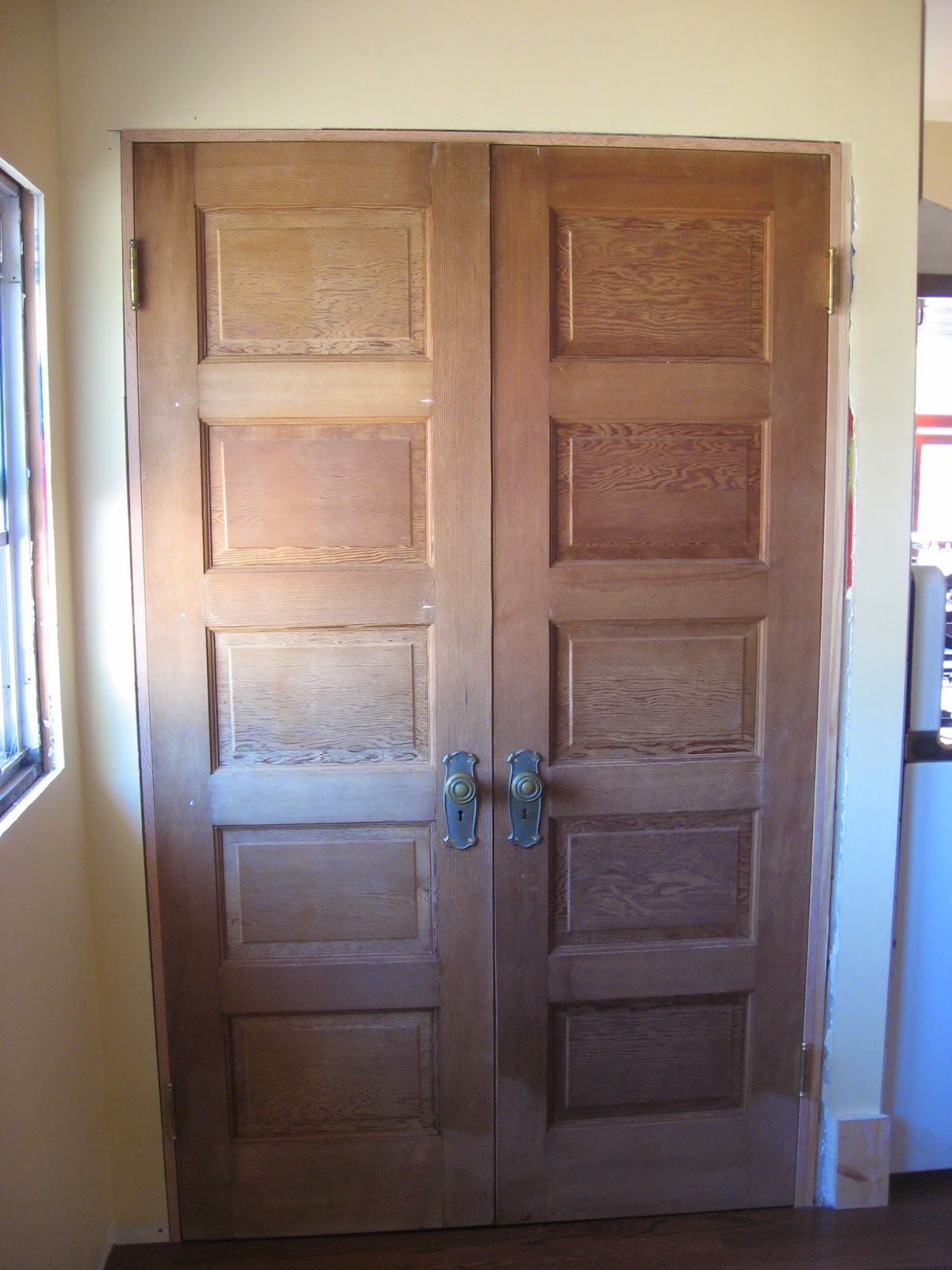 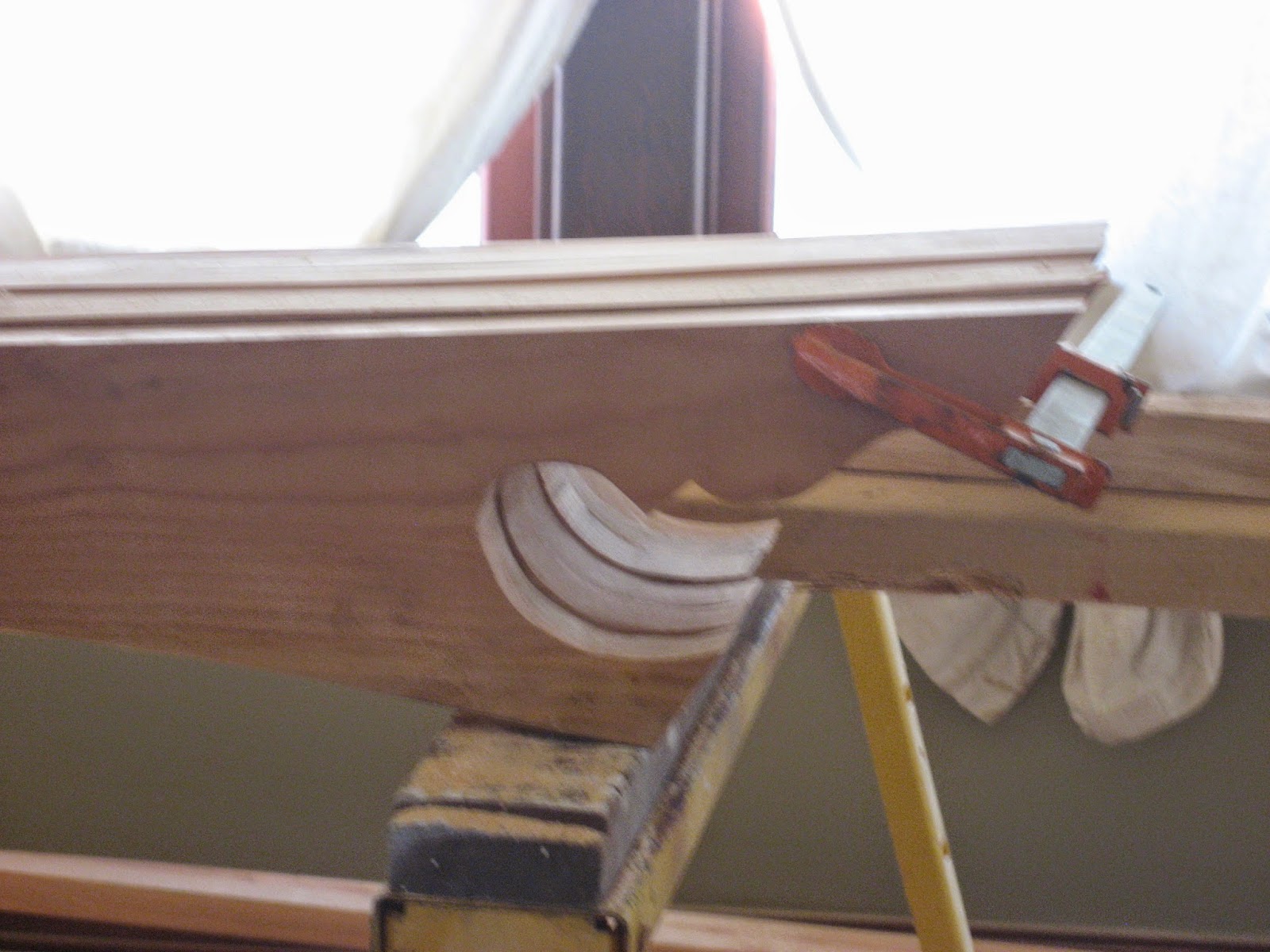 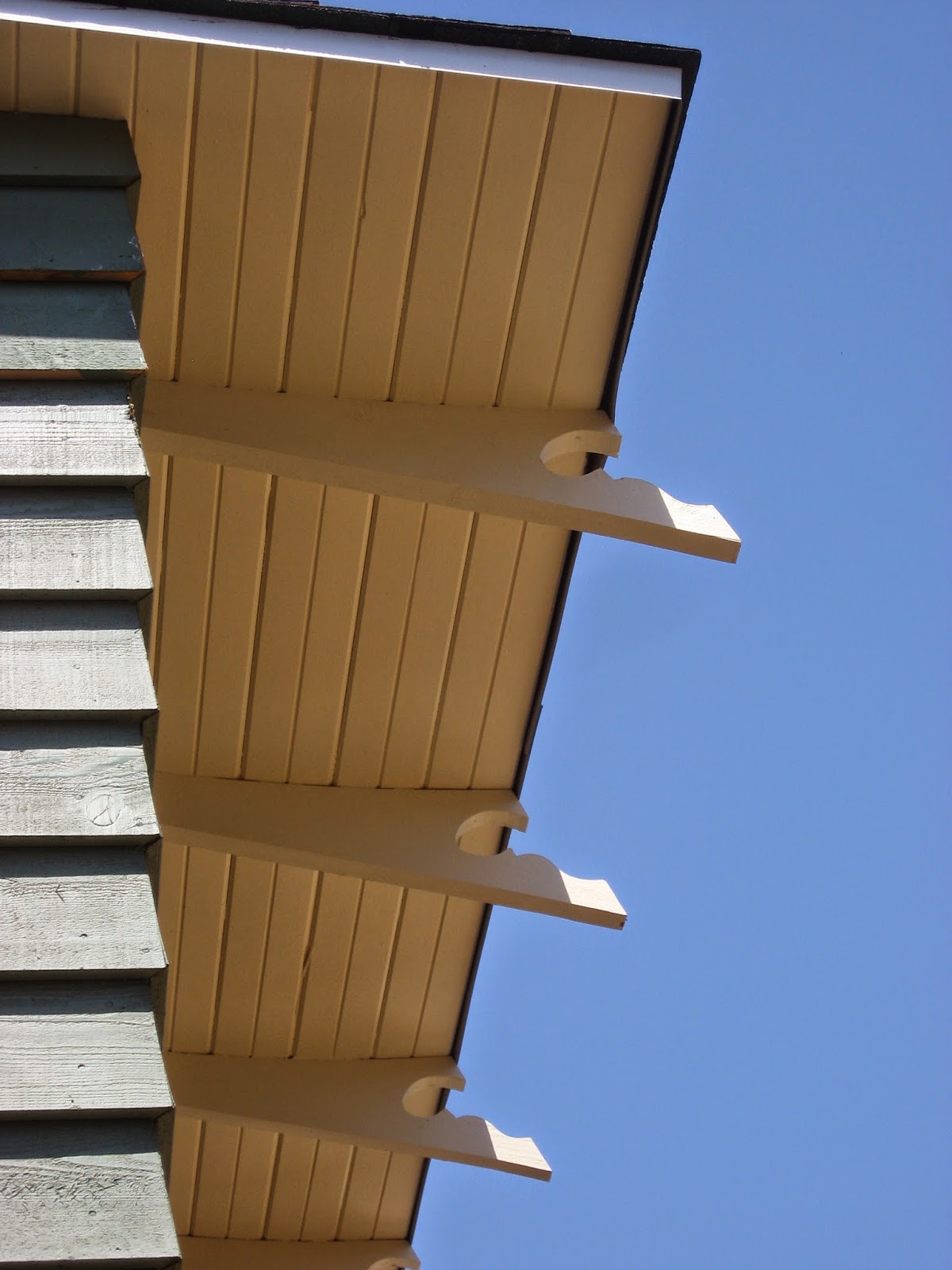 Raising the roof meant we needed new rafters.  The contractor cut the new rafters and their decorative tails on site, based on the design that had been on the house previously.

That's easier said than done.  He had to come up with a design that was historically correct, but would also support our gutters.  We still have to get the gutters back up, but I'm pretty confident this is going to work.
Posted by Ms. Nidoog at 7:36 PM No comments: 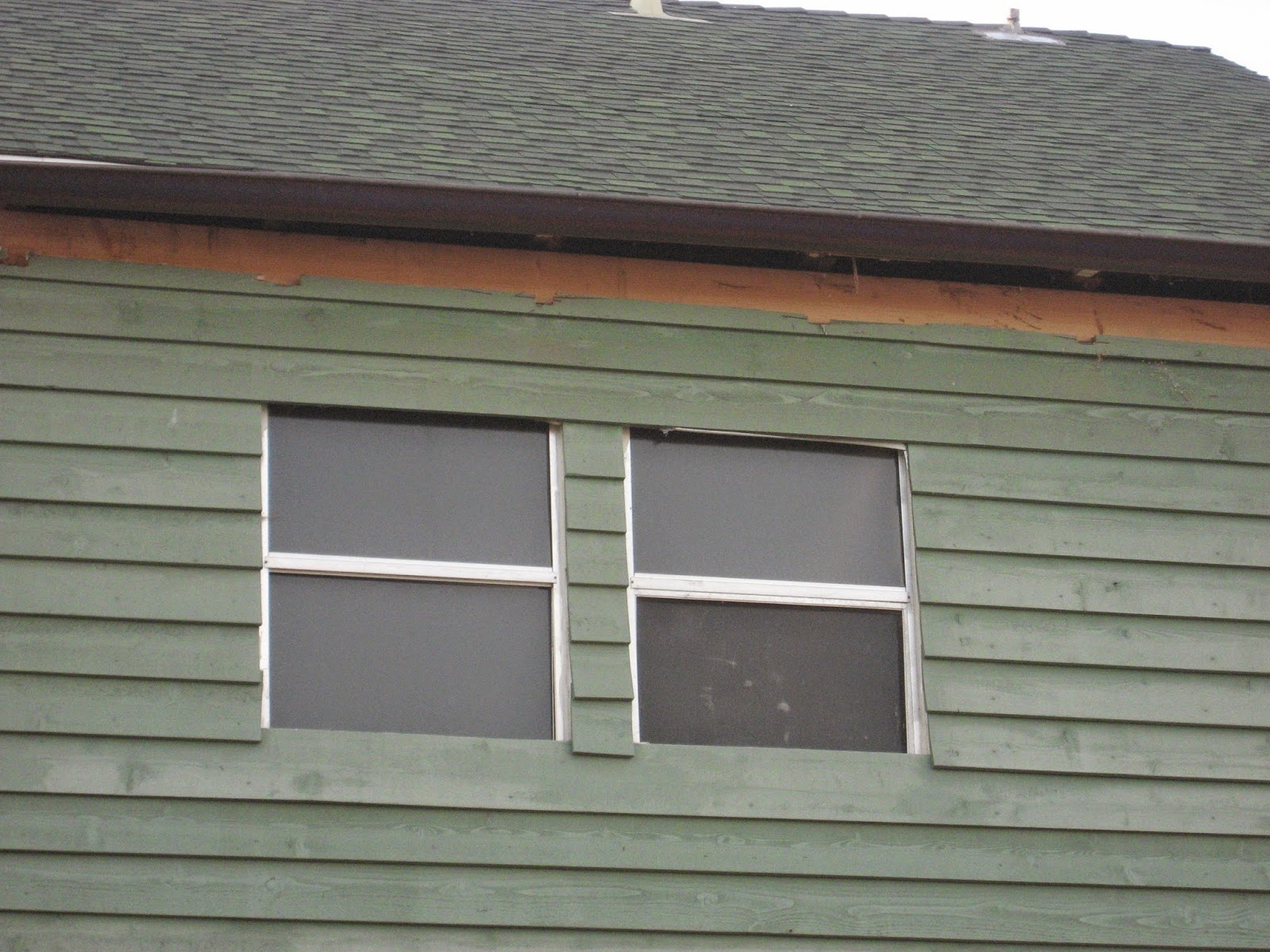 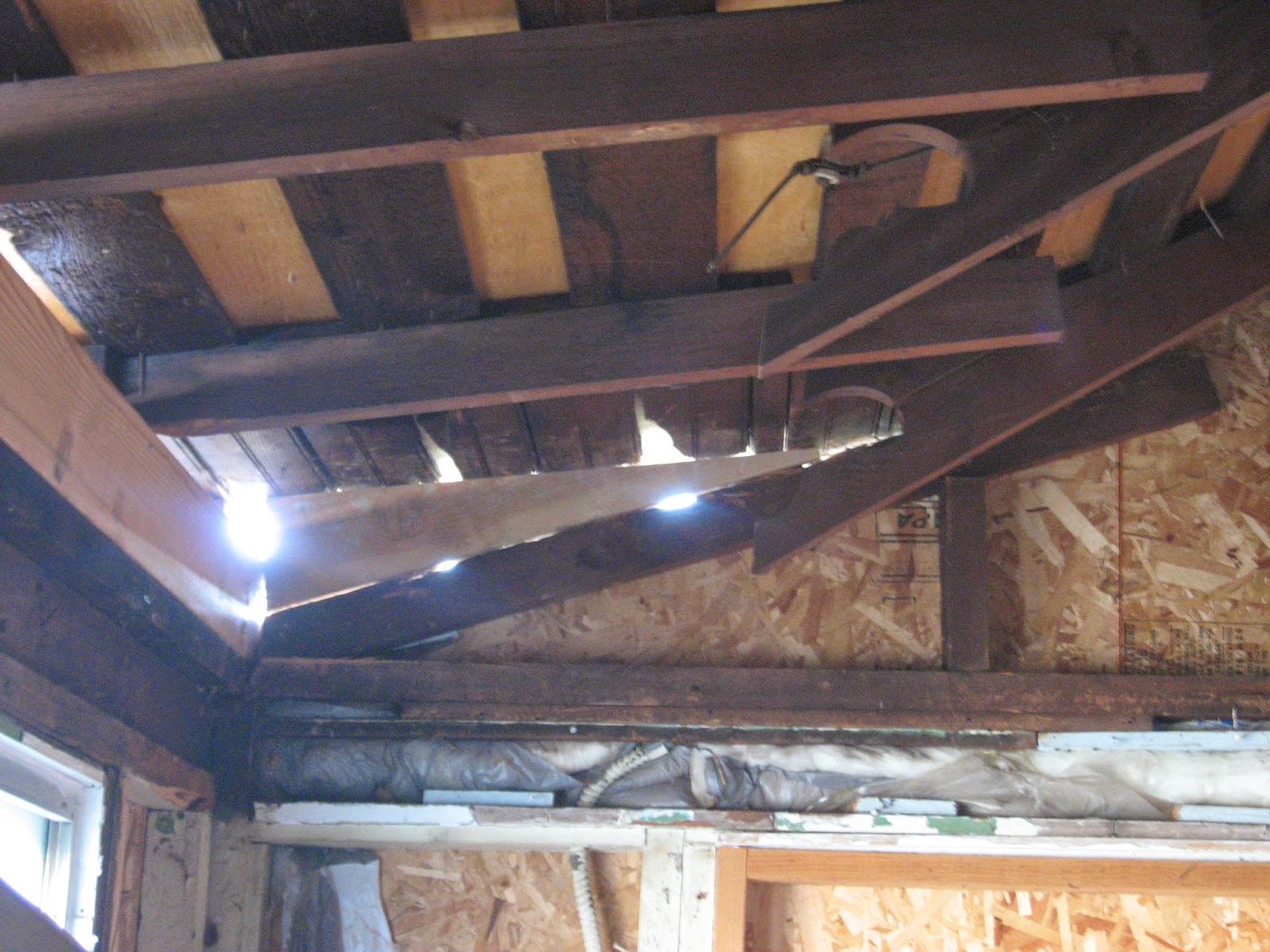 The plan is to ultimately build a deck off the kitchen, with dutch doors like the ones in the basement leading to it.

The back portion of our kitchen was originally a porch that previous owners had walled in, and the roof line was not high enough to accommodate doors that are tall enough for Rob to get through without having to duck.

In preparation for these future plans, the contractor raised the roof line of the back part of our house.  The tricky part was getting it to an angle the was high enough, but would still let rain run off of it.

We're supposed to have an El Niño winter, so we'll know then if we succeeded. 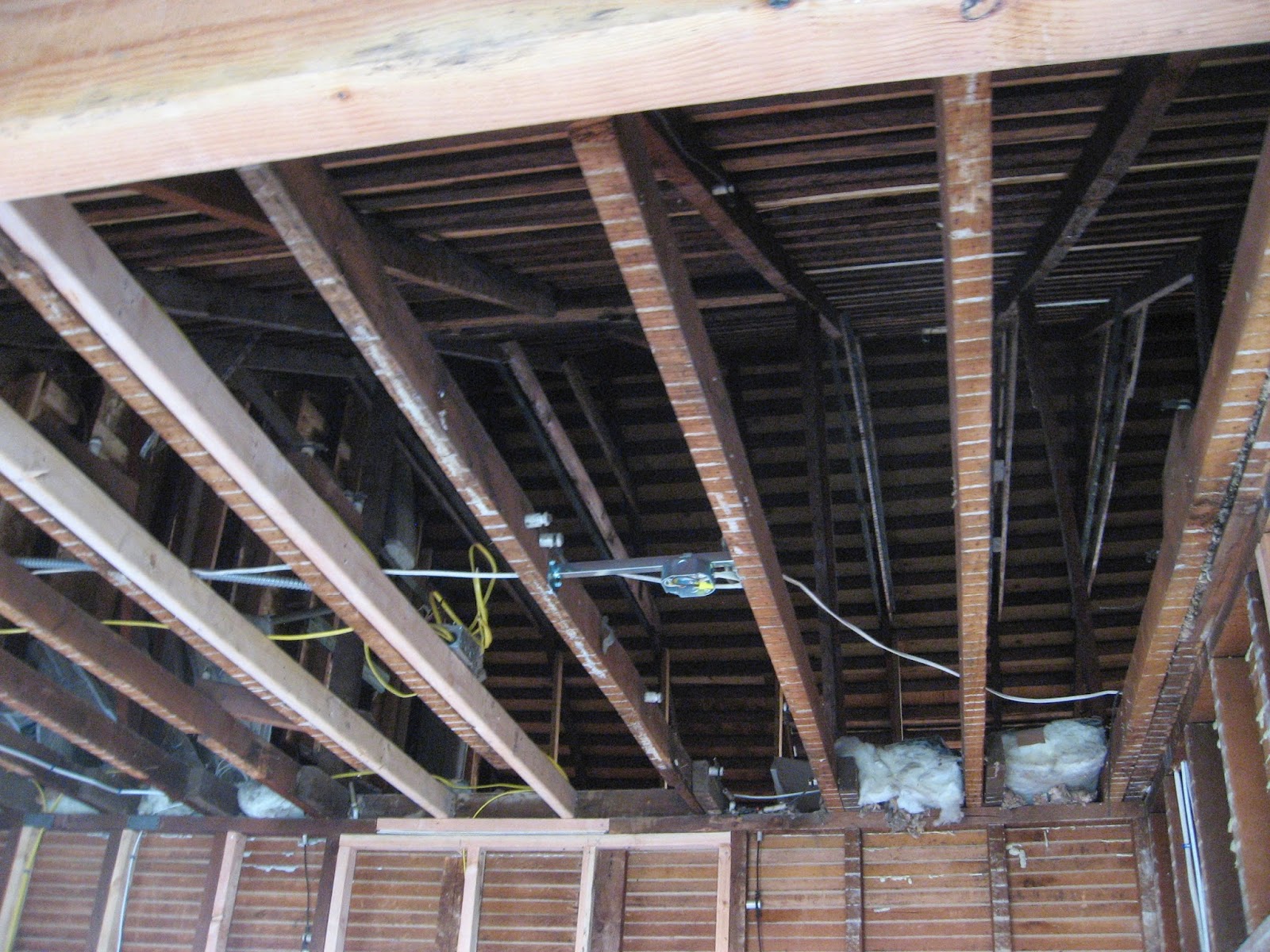 The ceiling had to be ripped out in the kitchen, both the crazy low ceiling the previous owners had put in, along with the original higher ceiling.  When the contractor did that, you could see all the way into the attic and through the vent for the roof fan. 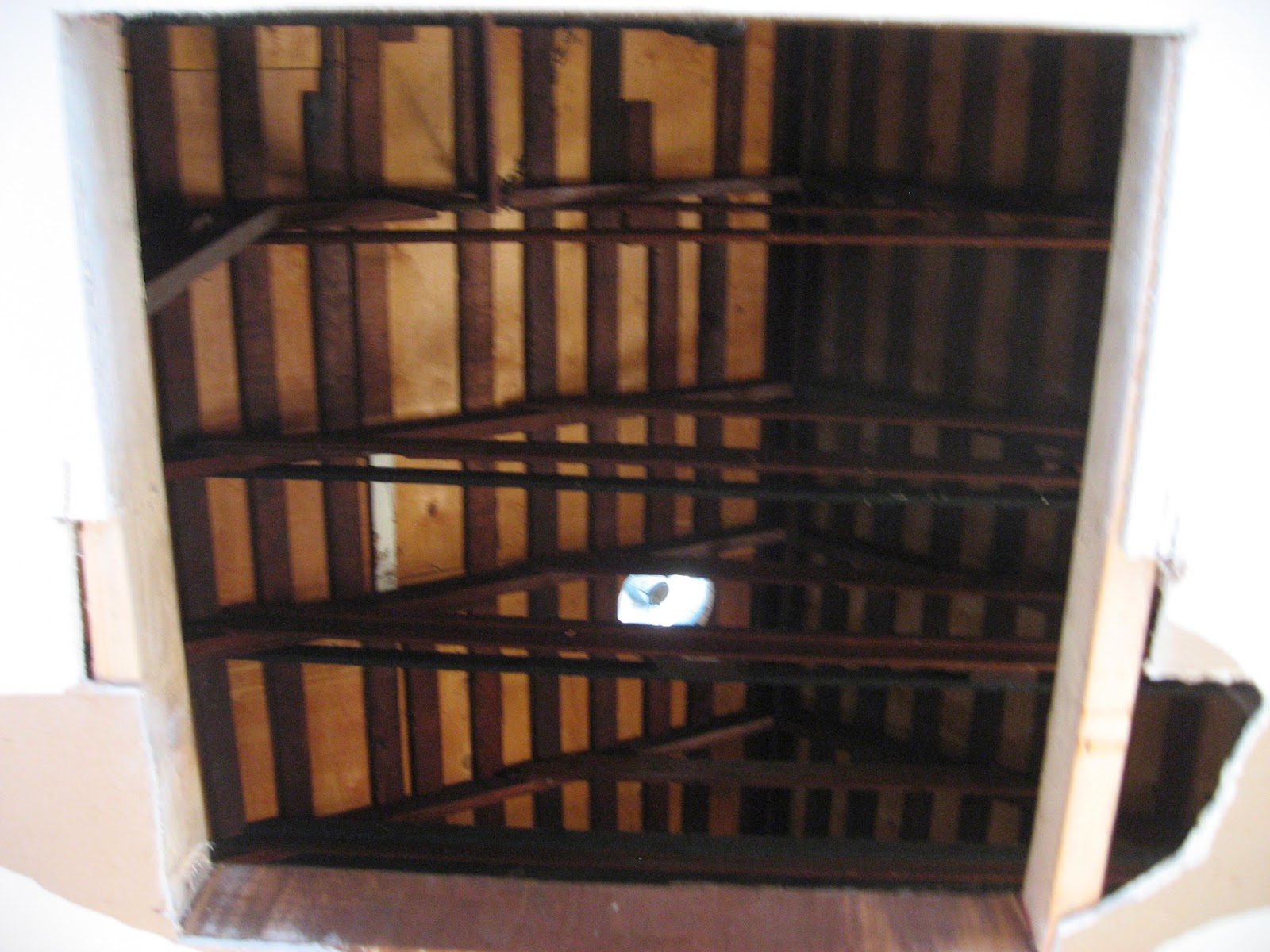 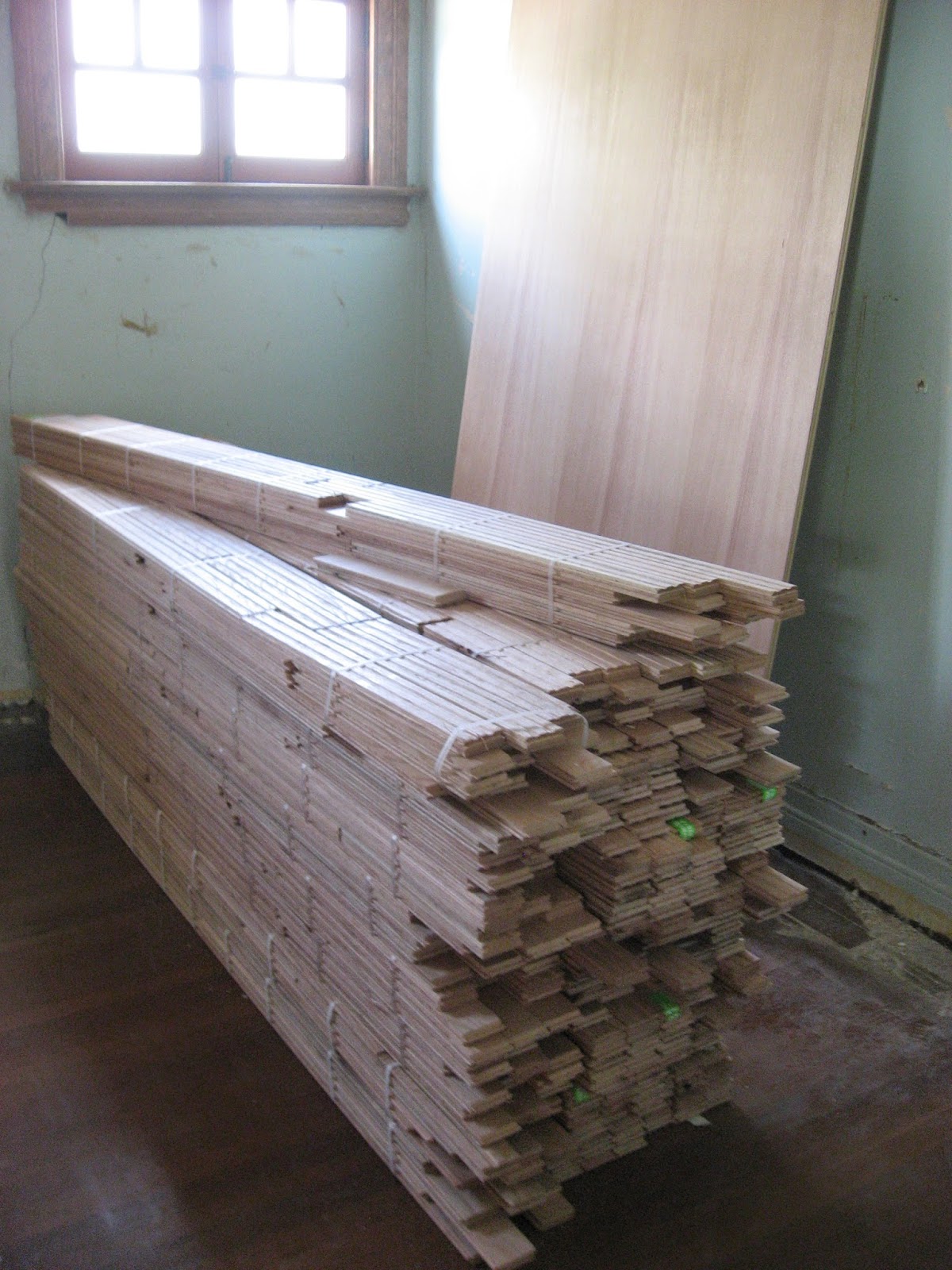 The new wood for the floors had to acclimate to our house, so it sat in stacks in the music room for weeks before the work could begin.
Posted by Ms. Nidoog at 11:48 AM No comments: The contractor set up a temporary stove top and we used the laundry room sink for dishes.   It's low and it was a bear standing at it.  Even with the temporary setup, we still ate at the taco truck more often than I care to admit.

The plastic billowing on the ceiling was to keep dust and debris from falling everywhere while the hardwood floors were being redone above us.

It wasn't the most comfortable, but at least we didn't have to move out while all this was being done.
Posted by Ms. Nidoog at 2:24 PM No comments:

The Way We Were 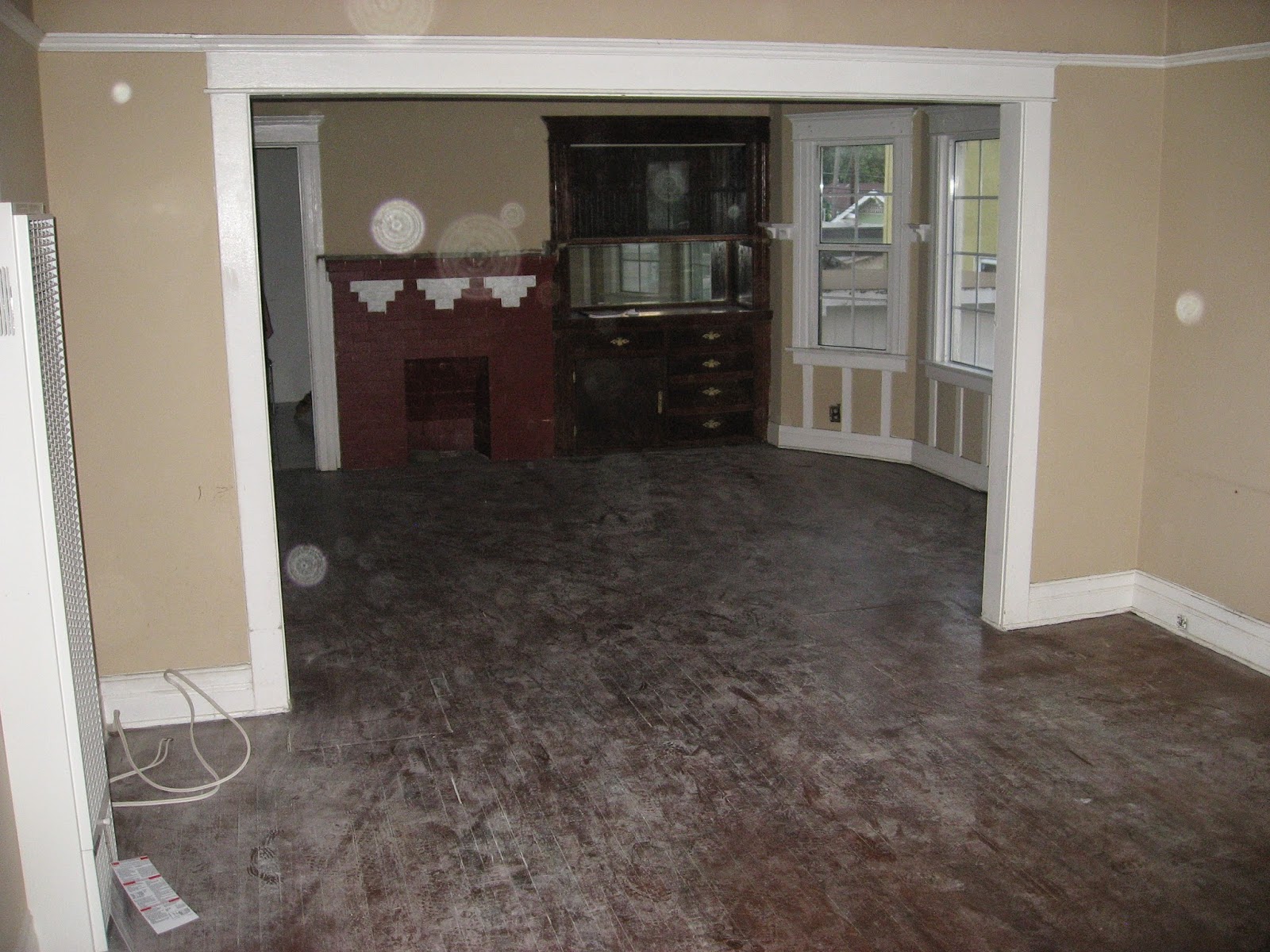 There's been a lot of progress at Goodin's Folly that I've been terrible about posting.

We redid the hardwood floors on the main floor of the house and the kitchen.

Before I show off the results, I'd like to remind everyone just what it used to look like. 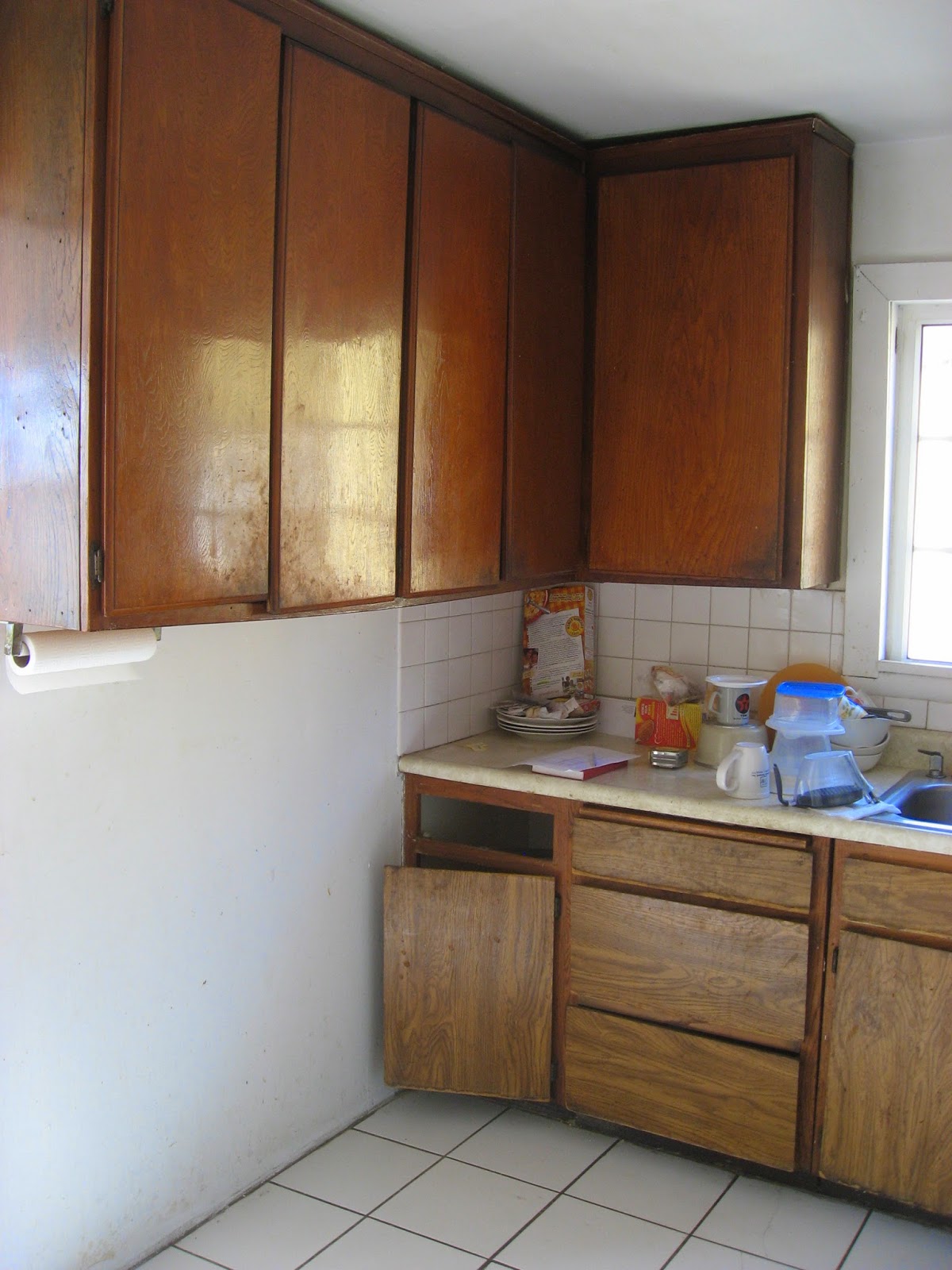 I don't have a good picture of the old floors, just this one from when we moved in and they were filthy.  The boards had started to split along the "tongue and groove" part and there were whole sections of floor that had been cut out and then badly patched.

The kitchen was a total disaster.  The cabinets were so covered in grease that they would stick shut.  Rob took down the upper ones and we used gorilla shelves for the first 3 1/2 years we lived here.  Because everything was out in the open, I'd have to wash dishes before I could use them.

Previous owners had inexplicably lowered the ceiling in the kitchen and it had huge grease stains on it that I could never quite clean off. 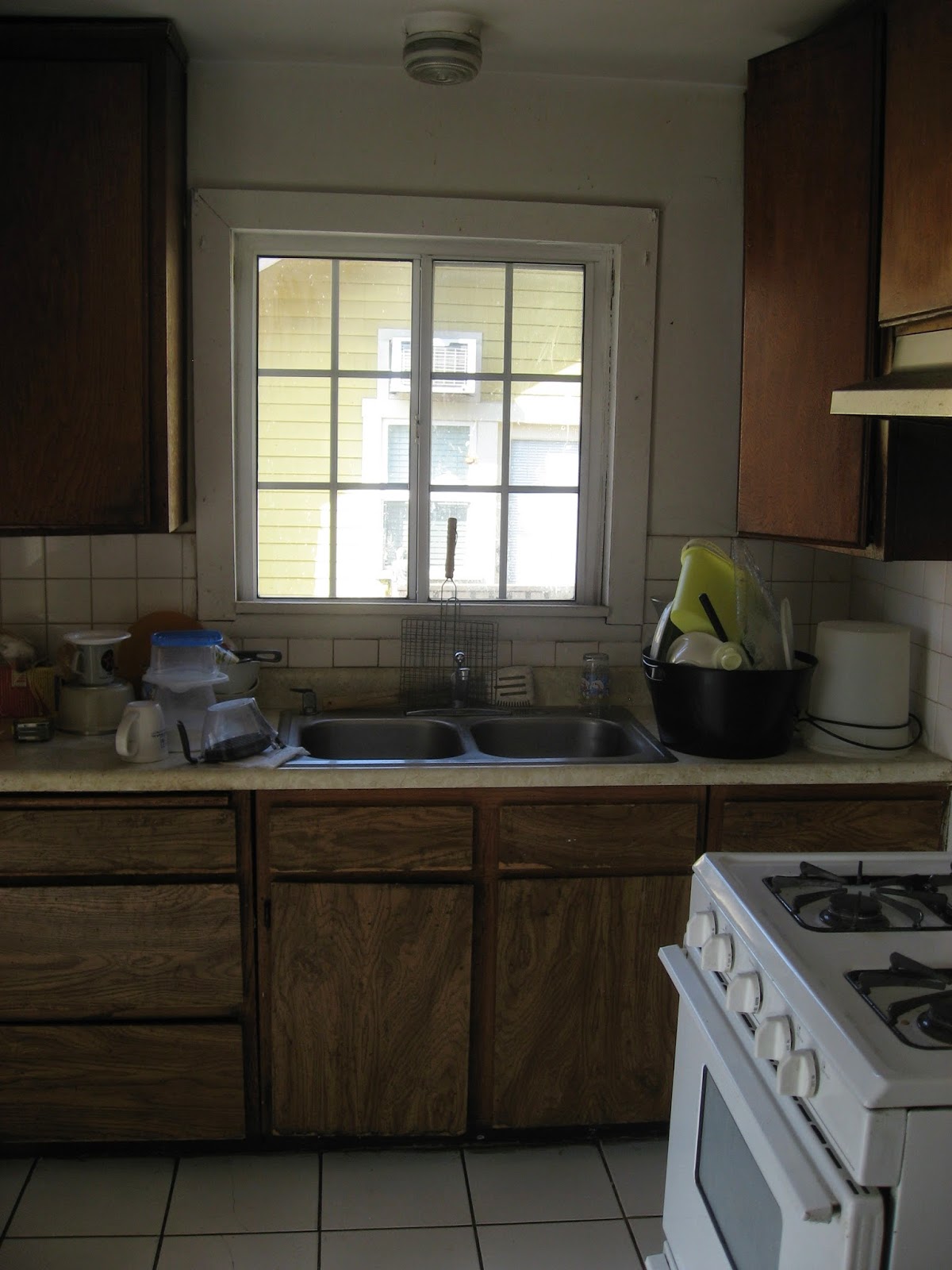 The floor tile was cracked in places and the faucet shot water in all directions, necessitating some McGyvering to keep from getting drenched.

We knew fixing all this was a huge job and our contractor couldn't believe we were going to live here while it was going on.  Thankfully, we had the basement, which became our apartment through all of this. 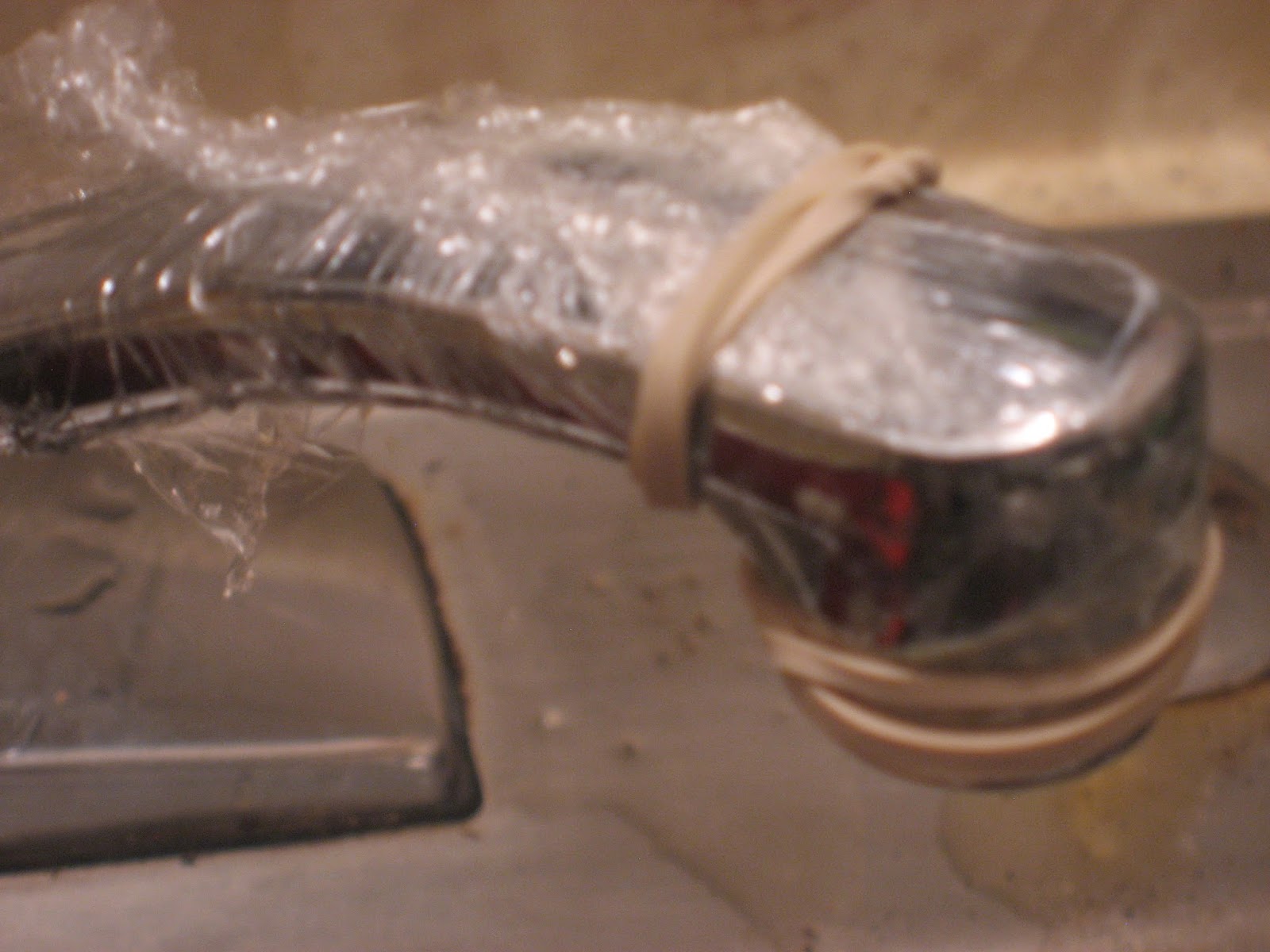 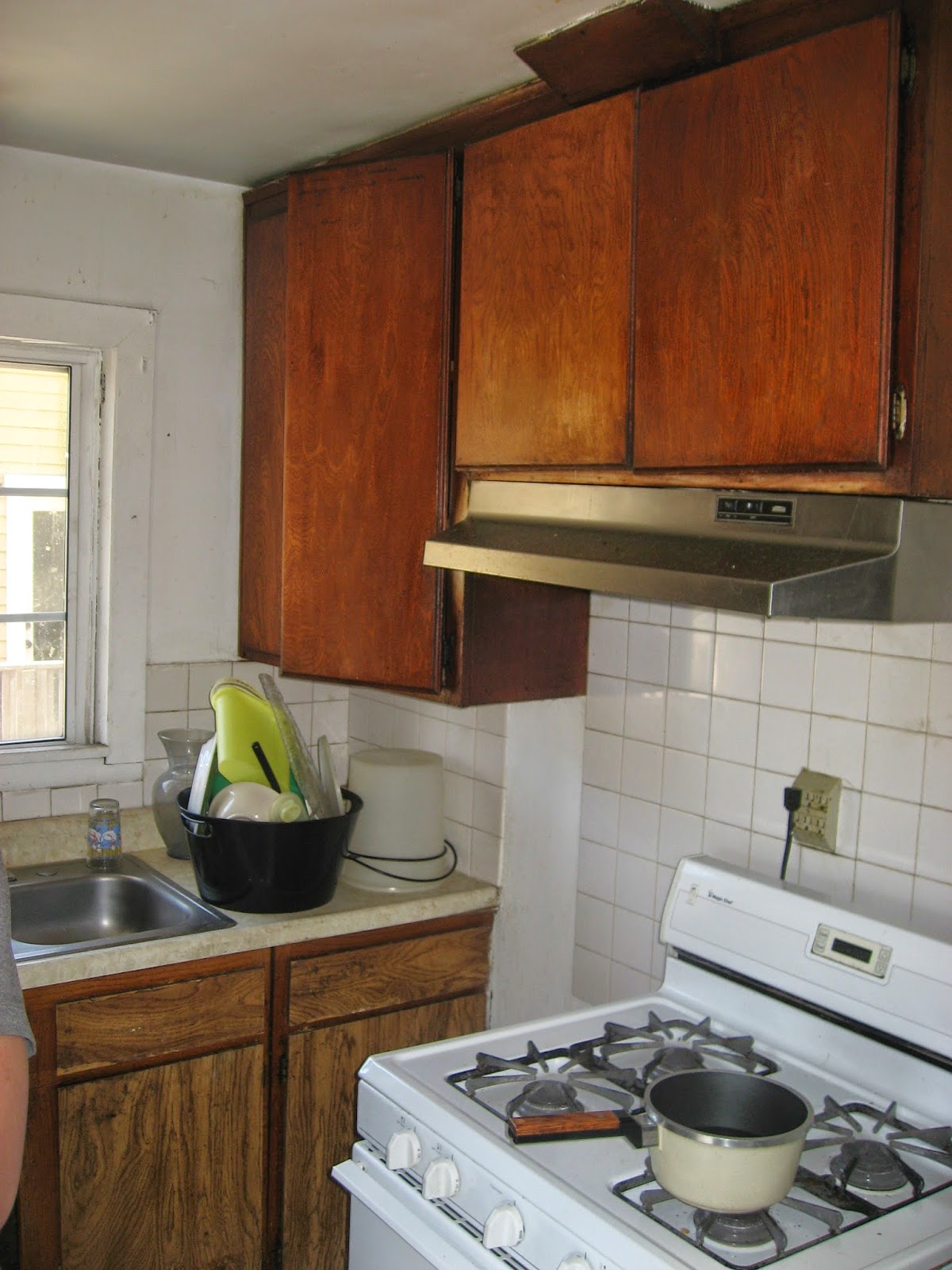