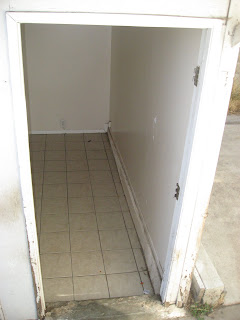 The former owners took the garage door with them when they moved out. We purchased a replacement today and plan to paint it a red very similar to the background of this blog.

We had to go to Home Depot twice because we hadn't gotten all the crucial measurements the first time around. (Height and width are obvious, but who would have guessed you need to know the thickness of your door frame? Honestly, aren't they all the same?)
Posted by Ms. Nidoog at 9:21 PM 2 comments: 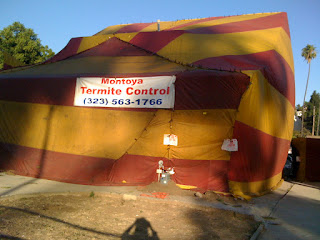 We're hoping the termite treatment gets rid of the fleas in the basement. Toaster, Idget and I are covered in bites. Idget's fur is so thin you can see where he's scratched and it kind of looks like chicken pox. Of course, Rob doesn't have a single bite.

We're a little concerned the fleas might become an ongoing problem, especially with the long grass in the backyard. Since we plan to have a vegetable garden, I'm reluctant to use anything too toxic to kill them off in the yard.

I've fantasized about owning chickens for some time and now that I know they eat fleas...
Posted by Ms. Nidoog at 4:56 PM No comments: 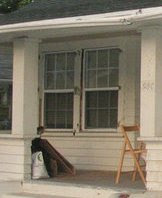 A top priority was getting the ghetto bars taken off the front windows. Lucky for us, the appraiser felt the same way and made the seller remove them during escrow. Now about that plywood floor on the porch...
Posted by Ms. Nidoog at 7:11 AM No comments: 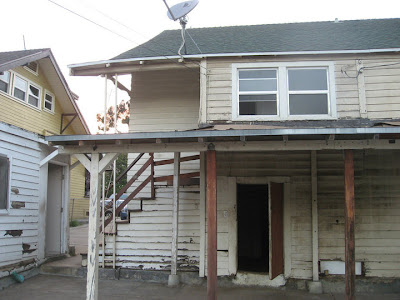 This shot of the back of the house only hints at the work we have ahead.

We christened this place 'casa de shithole' during escrow. Apparently Toaster agreed. He crapped on the floor within two minutes of walking in the door. 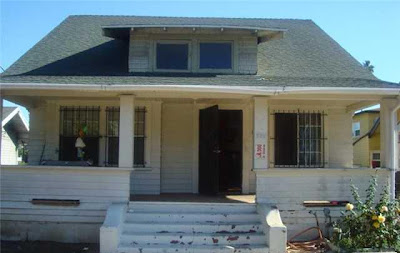 On March 13, we made an offer on this house. We were warned short sales aren't short, but we never imagined it would take until today for the place to be ours.
Posted by Ms. Nidoog at 4:05 PM 1 comment: